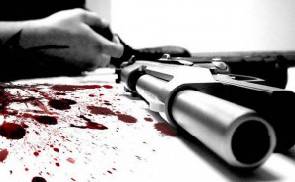 A 45-year old farmer, Sebrenya Mathias has shot himself at close range with a single barrel gun after several attempts to kill his 35-year old wife at Asotwe near Ejisu in the Ashanti region.

According to the police, the deceased shot the wife whiles they were returning from the farm after a fight ensued between them.

The wife who survived two gunshots narrated that the husband attempted to kill her for kicking against their children supporting them on the farm instead of being in school.

‘The deceased was returning from the farm with his wife, children and one of their friends when the incident happened,’ the police explained.

Ultimate Fm’s Isaac Bediako reports, that the victim was first shot in the shoulder but managed to escape the second shot.

It was later uncovered by the police that her husband had also committed suicide by shooting himself dead in the same farm where he wanted to kill his wife upon being hinted he was being trailed by the police.

The body of the deceased has been conveyed to the morgue.