FEATURE: In from the cold: Baba Rahman comes a full circle at Afcon 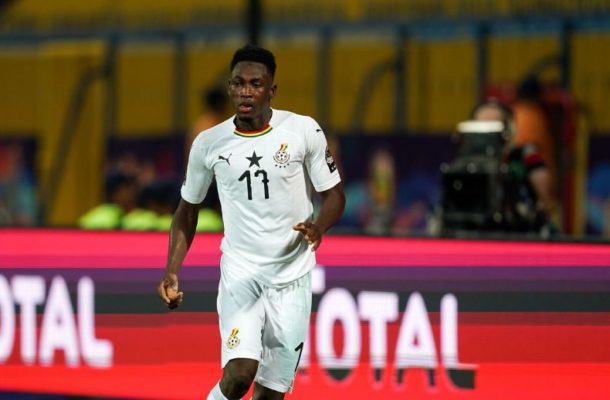 There were 893 days between Abdul Rahman Baba's last Africa Cup of Nations performance for Ghana -- against Uganda in January 2017 -- and his return to action in the tournament on Saturday.

The Black Stars held defending champions Cameroon 0-0 in Ismailia, with the left-back returning after rebuilding his career following a shattering cruciate ligament injury that curtailed his participation at the last edition... and transformed the trajectory of his career.

By now -- Baba Rahman, as he is more commonly known, turns 25 on Tuesday -- he should have established himself as Africa's finest player in his position.

Certainly, that was the way things appeared to be heading when, at age 20, he signed for Chelsea in August 2015 for a fee of £22 million after impressing in the Bundesliga for Augsburg.

Admittedly, there were concerns about his defensive work for the absolute top level of the Premier League -- Antonio Conte acknowledged as much when he told the full-back that he was not right for his 'defensive philosophy' -- before sending the full-back out on loan to Schalke 04.

But Baba still offered a compelling cocktail of stamina, versatility, intelligence and crossing prowess.  By the time the 2017 tournament rolled around in Gabon -- with Ghana among the favourites for the title -- he was only 22, and had ample opportunity to resolve any deficiencies in his game.

By then he'd already made 15 league appearances for Chelsea after being signed by Jose Mourinho's defending champions. But his maiden season in England was overshadowed by the maelstrom that accompanied the Portuguese coach's midseason exit from Stamford Bridge.

Back in Germany with Schalke, and with a manager, his former Augsburg boss Markus Weinzierl, who believed in him, Baba was consistently showcasing the technical quality, the athleticism, and the power that had made him such a tantalising prospect.

No one could have anticipated, as Ghana took to the sandy sub-standard Port-Gentil pitch to face Uganda in their Afcon 2017 opener, that Baba's career trajectory would change so drastically.

He first appeared to be in discomfort after 25 minutes, when he fell to the turf clutching his left knee following a tussle for the ball with Uganda's Luwagga Kizito, yet remained on for a further quarter of an hour before being stretchered off, unable to continue.

While the gravity of the situation wasn't immediately apparent to those watching on, his injury was later diagnosed by Schalke as a "a complex rupture to his cruciate ligament along with tears to his internal and external cartilage."

Then-Ghana FA chief Kwesi Nyantakyi bleakly described the injury as a potential career-ender, and forecast that Baba would be absent for the next seven months.

The youngster went from hoping to follow in Michael Essien's footsteps as a Ghanaian superstar at Chelsea, to rebuilding his career from square one, albeit still on the Blues' books.

In fact, things would be much worse than Nyantakyi predicted. Instead of returning in August 2017, he had to wait until May 2018 due to complications with his recovery. He did not take to the field until the 57th minute of Schalke's 1-0 Bundesliga victory over Eintracht Frankfurt in their final game of the season.

He'd make a handful of appearances for the German side during the start of the 2018-19 campaign, but by the end of 2018, Baba had managed just 196 minutes in the league in the previous two calendar years.

During two critical years in the player's development, years when he ought to be refining his craft and establishing himself as one of the continent's finest, the one-time wonderkid was focused merely on getting back to fitness and returning to the pitch.

Apparently unable to convince Schalke of his merits, Baba's loan was curtailed in January, and having not played a league game since September, he was sent to Ligue 1 side Stade de Reims in order to revitalise his career and give himself a shot at reaching the Nations Cup.

He took to life in France with ease, excelling through February; playing a key part in convincing victories over Stade Rennais and Montpellier before delivering an outstanding performance -- the kind we hadn't seen since late 2016 -- as Nantes were dispatched at the Stade Auguste-Delaune.

He ended the campaign with a goal and an assist in another Man of the Match display, as Reims thumped champions Paris Saint-Germain 3-1, and, three weeks later, was an unlikely inclusion in Kwesi Appiah's Egypt-bound squad.

Had Afcon not been shifted to June and July from its traditional January-February slot, it's hard to see how Baba would have been given a spot in the squad, but his form has been so eye-catching in France that the allure had clearly grown too strong for the Black Stars boss.

Baba sat out Ghana's opener, a 2-2 draw with Benin, before regaining his left-back berth at the expense of Lumor Agbenyenu for Saturday's stalemate with Cameroon.

Neither the result nor the performance impressed those watching back in Ghana, but for Baba, completing 90 minutes of a competitive international for the first time since November 2016, there was an unmistakable sense of finally getting that most promising of careers back on track.

He recovered from an early error to enjoy an encouraging showing, despite some occasional hesitancy, largely neutralising the threat of 2017 Afcon MVP Christian Bassogog.

"[It's] never too late to become the best in the world," Baba tweeted in September last year.

"It has not been the best of starts to the season, but [I'm] working every minute to turn things around quickly."

To be the best in the world -- or even the best African left-back in the game -- may now be beyond Baba, considering the time he's spent out of the game between 22 and 25, but no one can deny that he has turned things around following the tribulations of the past two and a half years.

As low-key as his return against Cameroon was, it ought to be remembered as one of the truly feel-good stories of this tournament.