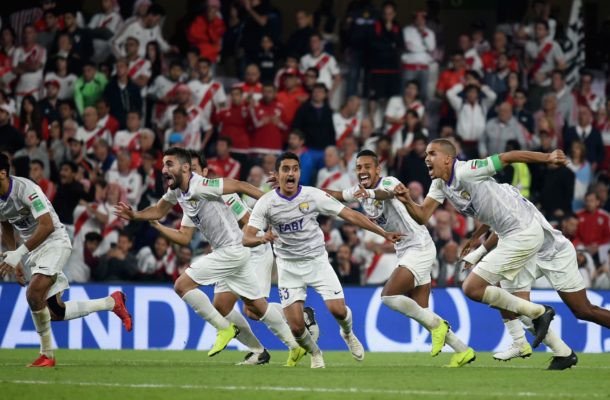 Al Ain will face the winner of Kashima Antlers and tournament holders Real Madrid in the showpiece decider on Saturday 22 December.

Zoran Mamic's side got off to the perfect start when they took the lead on three minutes when Ahmed Barman's corner met Marcus Berg, making his first start at UAE 2018, who headed the ball past Franco Armani.

River Plate then grabbed an equaliser on 11 minutes through Santos Borre. Al Ain goalkeeper Khalid Eisa produced a brave double stop to deny Lucas Pratto and Exequiel Palacios, but he was powerless to prevent Borre prodding home from close range on the loose ball.

Borre netted his second just five minutes later when Gonzalo Martinez raced down the right flank before playing in the Colombian inside the area who put River in front.

Hussein Elshahat thought he had netted an equaliser for the hosts shortly before the break, and even though his effort was ruled offside by a VAR decision, Al Ain would eventually celebrate a leveller. Early in the second half, Brazilian live-wire Caio netted his first goal of UAE 2018 in style after receiving the ball from Tsukasa Shiotani and firing low into Armani's net.

River were awarded a penalty when Milton Casco was pushed over inside the box by Mohamed Ahmad. Martinez stepped up and hit the ball with venom but his effort smashed off the crossbar.

With the score poised at 2-2, extra time followed, and after Al Ain had converted penalty No5, Enzo Perez's penalty was saved by Eisa - the shoot-out hero in Al Ain's opener against Team Wellington.