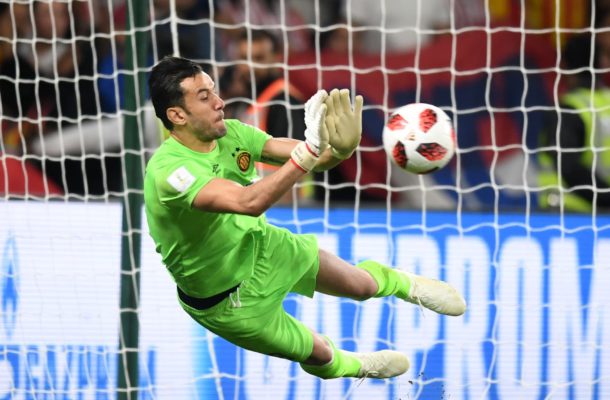 Jeridi: 2018 has been a wonderful year for Esperance

After losing their opening game against UAE’s Al Ain, Esperance de Tunis salvaged some pride by beating Mexico’s CD Guadalajara on penalties to finish fifth at the FIFA Club World Cup UAE 2018. This represents a considerable achievement for the Tunisians, who did not even have the CAF Champions League title as their main goal for the 2017/18 season.

Tuesday's victory over Chivas would not have been possible without standout performances from several players, most notably veteran goalkeeper Rami Jeridi, who saved a certain goal in the first half and then denied Isaac Brizuela in the dying moments of regulation time to help his side get to a penalties.

Jeridi’s heroics continued in the shoot-out when he then stopped one of Chivas' spot-kicks.

Right after the game, FIFA.com caught up with the goalkeeper, who was named the Alibaba Cloud Match Award winner. Asked about his team’s performance against the Mexican giants, he said: “We played well. From the very beginning, we were determined to put on a big performance, both individually and as a team. We were hoping to win it in regulation time, but the game ended in a draw. Credit to all the players, who performed well after a poor display in our opening game.”

On that same subject, we asked the shot-stopper something all Esperance fans will be wondering: how could the team play so poorly against Al Ain, and yet, so well against the CONCACAF Champions League winners? “There wasn’t that much of a difference,” he said. “The only problem is that we didn’t play as a team in the first encounter. Every player was thinking of individual solutions, and that affected our overall performance.

“After that poor performance in the first game, we analysed the things we needed to and corrected our mistakes. In the first fixture, there were actually some positive aspects to our play, so we built on those while eliminating the negative ones,” he added.

A year to remember Despite the bitter disappointment of losing to Al Ain, Esperance have had a great 2018. Fans will always remember it as the year the club won the Tunisian league title and emerged as African champions at the expense of Egyptian powerhouse Al Ahly before capping it off with a fifth-place finish at this year's Club World Cup.

"2018 has been a wonderful year,” said Jeridi. “We won a number of titles this year, even if the club is accustomed to success. Thankfully, we’re moving in the right direction and we’ll continue to work hard to achieve even more.”

On a personal level, the veteran goalkeeper sees his participation at UAE 2018 as a great achievement. “Every footballer dreams of playing at a Club World Cup,” he said. “For me, taking part at the age of 34 means a lot to me. And while we didn’t make the top three on this occasion, finishing fifth in a global event is a source of great pride for Esperance.”

Jeridi signed off with an optimistic message for the Esperance fans, saying: “Our future is bright. We’ll nourish this wonderful group of players to win more titles in the years ahead.”