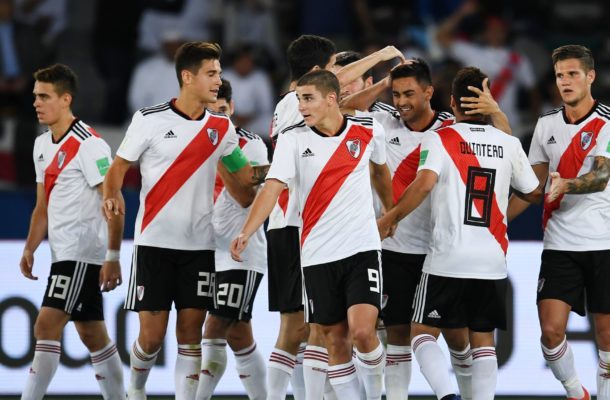 
River Plate bounced back from their FIFA Club World Cup semi-final disappointment to record a 4-0 victory over Kashima Antlers in the match for third place at the Zayed Sports City Stadium. Goals from Bruno Zuculini, Santos Borre and a farewell brace from Gonzalo Martinez saw the Argentinian side take bronze in Abu Dhabi.

Both teams enjoyed chances in the opening half with River’s Julian Alvarez being denied by Kashima goalkeeper Kwoun Suntae in the opening minute, before the forward played in Santos Borre whose effort was palmed away.

The Japanese side came close to taking the lead on 11 minutes when Yasushi Endo’s corner met Koki Anzai, whose flicked header found Jung Seunghyun waiting at the far post, but goalkeeper German Lux showed great reflexes to get a hand on the ball.

A clash with Borre saw Kashima goalkeeper Kwoun withdrawn due to injury and no sooner had replacement stopper Hitoshi Sogahata put on his gloves, his side were a goal down. De la Cruz’s corner found the head of Zuculini to give River the lead on 24 minutes.

Sogahata was then called into action moments later to deny Alvarez’s effort with his legs, while at the other end, Anzai's strike smashed off the bar before the break.

Gonzalo Martinez, on his final appearance for River after he confirmed a move to MLS side Atlanta United, doubled River's lead on 73 minutes after converting Alvarez's pass across the box with a delightful side-footed finish from close range.

Kashima then suffered the agony of hitting the bar twice in quick succession through Shoma and a Nagaki free-kick before finding themselves another goal down. Borre was brought down inside the area and he made no mistake from the spot, converting River's third.

Martinez then made it four in injury-time after working his way into the box and superbly placing the ball past Sogahata to make it four.

Los Millonarios now return to Buenos Aires for the first time since claiming the Copa Libertadores against Boca Juniors in Madrid.