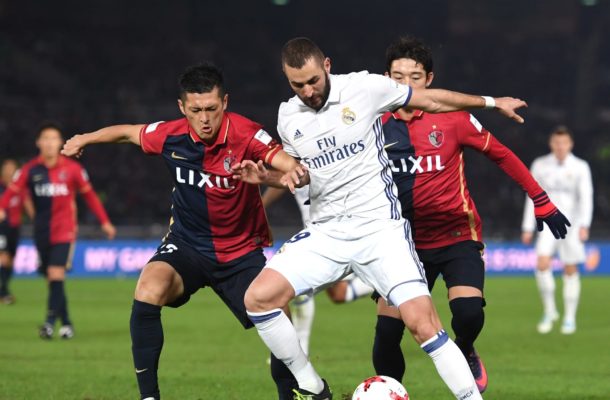 Memories of 2016 for Kashima ahead of Real reunion

It is a repeat of the 2016 final; Kashima Antlers will meet Real Madrid once again at the FIFA Club World Cup. Two years ago, the sides locked horns in Yokohama when the Japanese outfit shocked the footballing world by taking a second-half lead against the European giants - courtesy of Gaku Shibasaki’s brace.

It took some customary magic from Cristiano Ronaldo to help Real claim their second Club World Cup trophy, the Portuguese star completing his hat-trick in extra time as the Spanish giants' triumphed 4-2.

The sides now meet again, this time in Abu Dhabi, and will vie for a place in the UAE 2018 final.


Memories of that 2016 final are still very much fresh in the mind of many within the Kashima squad. Six players who featured in that showpiece decider two years ago played in their side’s second-round victory against Chivas on Saturday.

Now back at the tournament as champions of Asia, those six will be particularly keen to remind the Kashima dressing room of the lessons learned from that final.

A veteran of that 2016 decider, Shoma Doi spoke of those lessons post-match on Saturday: "We know that if there’s a moment when there’s a lapse of concentration, they will punish us," he said. "That’s what we learned from the 2016 final. We don’t want to give them that.”

Go Oiwa, the man leading Kashima at UAE 2018, watched that final from the sidelines as assistant manager to Masatada Ishii and feels the reunion two years on will capture the imagination.

“Last time in Japan, in the 2016 final, we made a great impact on a lot of people,” he said. “But against Madrid we really wanted to win, that’s how we thought.

“Yes we lost, it was disappointing, but we now have a stage to show our disappointment. We won this opportunity ourselves and that’s very pleasing. This match is going to get a lot of attention.”

As Kashima search for redemption on Wednesday, they will be able to rely on their passionate red-clad fans to lend them their support throughout the encounter. The host team in 2016, Kashima drew strength from a fervent home support as they stormed to the final against the odds. This time, ardent fans have travelled from Japan’s Kanto region to support the 2018 AFC Champions League winners at their second world finals.