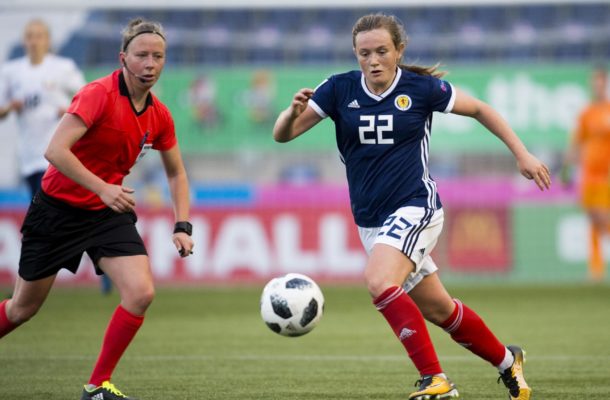 
It is rare these days to see coaches single out individuals for special praise; still rarer to hear one describe a player as “personifying” their team’s positive attributes.

But while it was striking that Scotland coach Shelley Kerr did just this, more remarkable was the player she chose to laud. It might have been expected, after all, that the standard-bearer would be identified as captain Rachel Corsie, or long-time star Kim Little, who has dazzled in elite leagues across the world. But Kerr instead highlighted Erin Cuthbert, still just 20, as the player who embodies the identity of her history-making side.

“For all Erin’s attributes and the abundant talent, the one thing she’s got that we’ve probably missed is that ‘Scottishness’,” said Kerr. “She’s streetwise, she’s gallus (a Scottish term reflecting style and swagger), she’s confident and she’s a fighter with a real desire to win. That’s the kind of Scottishness we’re looking for.”

High praise indeed, and sentiments attributed by Cuthbert herself to Kerr’s appreciation of her outlook on the game.

“I hadn’t heard Shelley had said that, but it’s a big compliment,” Cuthbert told FIFA.com. “I think she knows that every time I put on the shirt, I feel such a sense of responsibility and make sure I leave nothing on the pitch.

“It is nice that people see that because, more than goals or skill, I’d like to be known for my attitude - always giving everything and working for the team.”

Yet Cuthbert, as the clip above demonstrates, is far more than just a hard worker. Her Chelsea coach, Emma Hayes, is another huge fan and has said that this talented and driven youngster “can achieve anything she wants”.

Playing in a FIFA Women’s World Cup has always been high on Cuthbert’s list in that respect and, fitness permitting, she will be part of the first Scotland team to do this in just a few short months.

“It still feels surreal. Qualifying, and the way we did it, was just incredible – I still find it hard to put into words.

“I remember watching the 2015 final on holiday and the whole spectacle of it – the packed stadium, Carli Lloyd’s goal from halfway – was just amazing. I’d always dreamed of playing in a World Cup but that just made me all the more determined.”

The 20-year-old was still a few weeks from being born when a Scottish team last graced the global stage. That 1998 tournament also took place in France, and while the men made their traditional group-stage exit, Cuthbert & Co are intent on sticking around.

“We’re definitely not going there just to enjoy the experience, be part of it and make up the numbers,” she vowed. “We’re going to compete. No-one will get an easy game against us.”


Cuthbert has fond memories of the 2017 UEFA Women’s EURO, when she made history as scorer of Scotland’s first goal at a major women’s tournament. But while the Scots went on to beat Spain, their 6-0 opening-match drubbing by England has coloured predictions about the sides’ rematch in France.

“The EURO didn’t start the way we wanted it to but there were circumstances that made that very difficult for us – injuries to key players and other things,” Cuthbert responded. “The team has grown a lot since then though. We know it will be tough but I’m very confident we’ll give a good account of ourselves.”

Career highlight? Qualifying for the World Cup and scoring for Scotland at the EURO.

Favourite Scotland memory as a fan? Probably the game against England when Leigh Griffiths scored his two free-kicks. I was at Hampden that day and the atmosphere was incredible.

Scotland hero? Julie Fleeting (Scotland women’s record scorer). She came from my area and I always used to see her when I was kicking a ball about at my local sports club. She was a great player and a massive inspiration to me.

Best part about being a footballer? Doing what you love every single day.