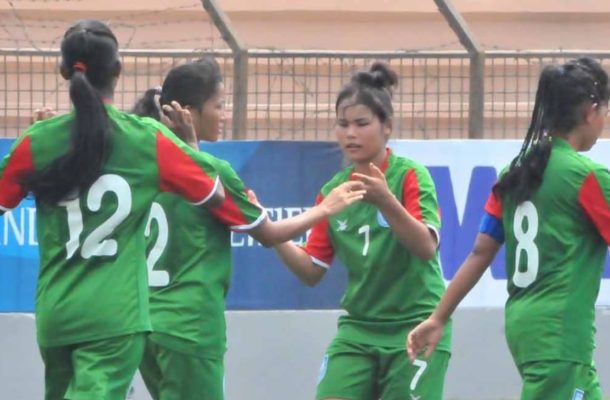 Kuala Lumpur: Tohura Khatun struck four as Bangladesh got their AFC U-16 Women’s Championship 2019 Qualifiers Round 2 campaign off to a brilliant start with a 10-0 win over Philippines in a Group B tie on Wednesday.


Bangladesh, seeking to make it back-to-back qualification for the Finals, raced off the blocks as Khatun gave them the lead just two minutes into the match at the Mandalar Thiri Stadium in Mandalay, Myanmar.

Spurred by the early goal, Bangladesh continued to press and Khatun scored her second in the 17th minute and the lead was widened further just seconds later as Shamsunnahar added the South Asian side's third.

Khatun scored Bangladesh's next two goals, finding the back of the net in the 24th and 36th minutes as Shamsunnahar made it 6-0 from the penalty spot in the 42nd.

There was more misfortune for Philippines as Mikaela Villacin put the ball into her own net just a minute into the second half.

Anuching Mogini continued Bangladesh's goal rush with strikes in the 58th and 86th minutes while Maria Manda also got on the scoresheet in the 64th minute.

Up next for Bangladesh are Myanmar while Philippines will meet China PR.

Round 2 of the Qualifiers is divided into two groups of four teams with the group winners and runners-up joining the top three teams from the 2017 edition - DPR Korea, Korea Republic and Japan - along with host Thailand, in the Finals in September.

Australia, Vietnam, Islamic Republic of Iran and host nation Laos are in Group A, which kicks off on March 3, of the Qualifiers.