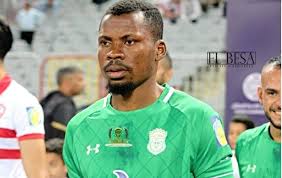 Former B Chelsea defender Wilson Akakpo has been refused permission by club Ittihad Alexandria to leave Egypt over Coronavirus scare.

Akakpo, 27 will have to remain in Egypt as the Alexandrian side want to protect its players from catching the disease, which is tearing through the globe.

The Togolese star is among five players of the club to be blocked from travelling back to their respective countries amid the Coronavirus scare.

Head Coach Talaat Youssef, is reported to have rejected the request of the five to travel to their country, during the period of cessation of activity.

Ugandan Emmanuel Okoye, the Libyan Anis Salto, the Syrian Omar Field and the Ivorian Razak Cisse are the other four who can't travel out of Egypt by the order of  the coach.

The Egyptian Football Association have already suspended sports activities for a period of two weeks, as a precaution against the Corona virus.

It is learned that Youssef refused the travel of the players due to his fear of infection with the Coronavirus, which is currently spreading in most countries of the world.

Youssef decided that the team will return to team training next Wednesday, until the date of the matches is decided.