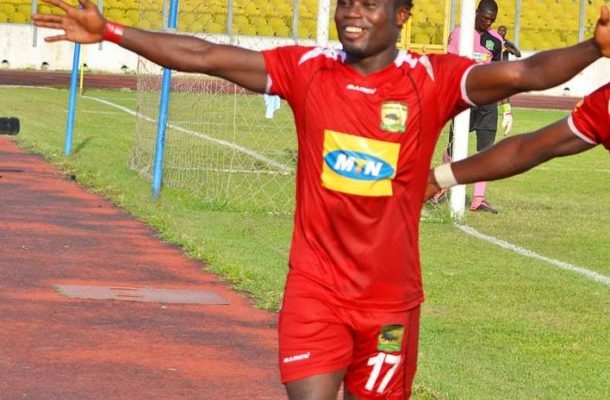 Frederick Boateng joined Asante Kotoko with so much promise but it was only a false dawn as he failed to glitter or score to save his career with the porcupine warriors.

But there was one common feature with the striker as he got this moniker 'Obinim Sticker' referring to a miracle sticker which is sold by popular pastor of International Godsway Church, Bishop Daniel Obinim.

The player was seen in the Pastor's church on TV with the pastor prophesying to the player that he will have a fruitful season with Kotoko but that was never the case as his career at Kotoko was hell and less joyous.

It was the believe of many that he had gone to the pastor for that magic wand of a sticker from the pastor hence the name Obinim sticker.

The player in an interview with Nimde3 Fm bares it all about how he got that alias 'Obinim Sticker'.

“As a footballer, I believe in prayers and with that, I don’t joke with my church,” he told Nimde3 FM.

“I had this friend who stays close to where I was staying during my time with Asante Kotoko. He invited me to his church one day, but before then, I asked him the name of the church, and he told me it’s Angel Obinim’s church. Personally, I have not met Angel Obinim before, so I decided to go with him.

“When I went there, the man [Angel Obinim] came to where I was staying and started telling me things about my career and my secret as well. So there was one presenter in Kumasi who was watching the church service live on TV, so when he saw me there, the presenter came on air to announce that, I have been attending Angel Obinim’s church to seek for spiritual help and that’s when Kotoko fans and Ghanaians started calling me Obinim Sticker.”, Boateng narrated.

The former Inter Allies player joined the porcupine warriors on a two year deal in 2018 but his contract was ripped apart after a season.