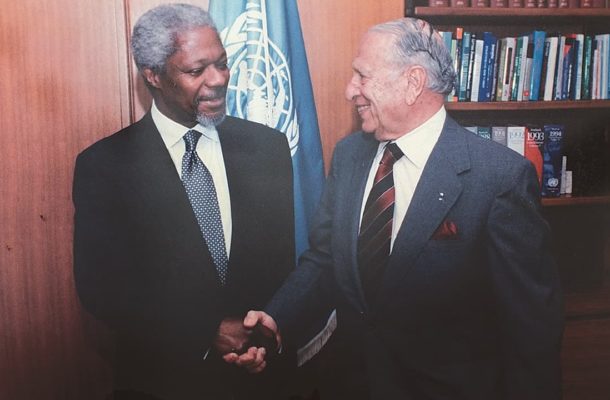 Markar at the United Nations with Kofi Annan

Pakistan's former ambassador to Ghana, Jamsheed Marker, an iconic diplomat who made his mark in the West African country passed away in Karachi on Thursday.

The former veteran Pakistani diplomat was 95 and had been quite frail of late.

He served Pakistan as a diplomat for an illustrious 30-year-long career in more countries than any other diplomat including the United States, Ghana, France, Japan and Geneva.

Marker, born in 1922 to a Parsi family with ties to Pakistan’s shipping and pharmaceutical business, attended The Doon School in India’s Uttarakhand state for his early education.

He had a passion for cricket, and began playing cricket at the college. He went on to become one of Pakistan’s earliest radio cricket commentators, along with Omar Qureshi.

The two had amazing chemistry that made cricket commentary in Pakistan as popular as the sport itself.

According to journalist Susan Taylor, he joined the diplomatic service in 1965 and was appointed Pakistan’s ambassador to Ghana.

He served in 10 different capitals, with nine further concurrent accreditations.