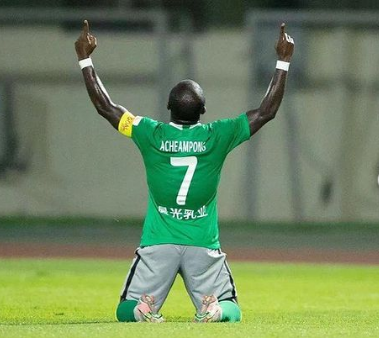 Ghanaian winger Franl Acheampong started life at his new Chinese Super League club Shenzhen FC with a goal as he helped his side clinch a 2-1 win over Hanan Jianye.

The Ghanaian joined his new side at the beginning of the month after terminating his contract with Tianjin TEDA.

He was also handed the captain's armband on his debut as he helped out his side secure maximum points.

Acheampong opened the scores of the match in the 21st minute after being teed up by Columbian International Juan Quintero to make it 1-0 with a cool finish at the Zhengzhou Hanghai Stadium.

It did not take long as Henan Jianye pulled parity ten minutes later with the goal coming from Mohamed Buya Turay to tie the match.

Shenzhen sealed the win when Brazilian striker Alan Kardec made it 2-1 to give Shenzen FC all three points.