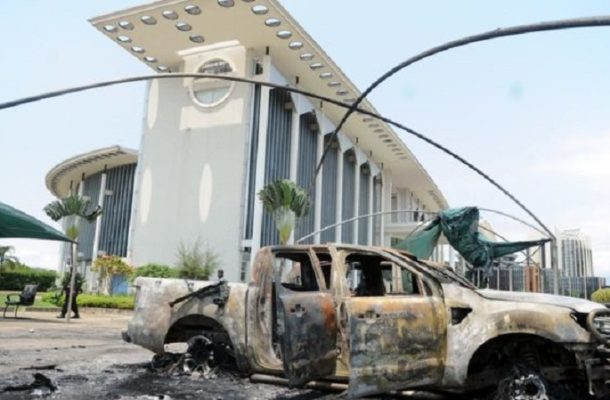 Gabon's opposition leader has lodged a challenge to the presidential election result at the constitutional court.

Defeated presidential candidate Jean Ping has complained of fraud, pointing out that in one province incumbent Ali Bongo won 95% of the vote.

The European Union has said there were "clear anomalies" in last month's poll - charges denied by Mr Bongo, who in turn accused Mr Ping of fraud.

A court has never overturned a presidential election result in Africa, according to Robert Gerenge, head of special programmes at the Electoral Institute for Sustainable Democracy in Africa.

In the past year, losing candidates in Uganda and Zambia have failed in their legal efforts, although that it is not to say all elections are rigged.

In Zambia, a technicality stopped Hakainde Hichilema's attempt to get last month's presidential election result changed. He ran out of time to present his case.

Uganda's supreme court in March dismissed Amama Mbabazi's challenge saying that while there were issues, they did not affect the final result.

This ruling had a precedent across the continent.

Following Nigeria's 2007 election, the legal process took 20 months before the courts had a final answer.

The supreme court said despite irregularities, there was no proof that they altered the outcome.

In Zimbabwe, Morgan Tsvangirai initially went to court in 2013 to challenge the re-election of President Robert Mugabe. But he dropped the case, saying that the president had stopped him from getting a fair hearing.

In general there are three types of situations, Mr Gerenge says:

The EU has also questioned the legitimacy of the election results.

But Mr Bongo retaliated, telling France's RTL radio "some of the EU observers overstepped their mission".

When the election results were announced people took to the street in protest.

The Gabonese authorities say three people have died and 105 have been injured following violent clashes and more than 800 arrests.

Mr Ping puts the death toll higher - saying dozens of his supporters have been killed and that a presidential guard helicopter bombed his headquarters.

Mr Bongo took office in 2009 after an election marred by violence
He succeeding his father Omar Bongo who had come to power in 1967 and was Africa's longest serving leader
Veteran diplomat Mr Ping had served as chair of the African Union
He had been a close ally of Omar Bongo and had been his foreign minister
He had two children with Omar Bongo's daughter, Pascaline