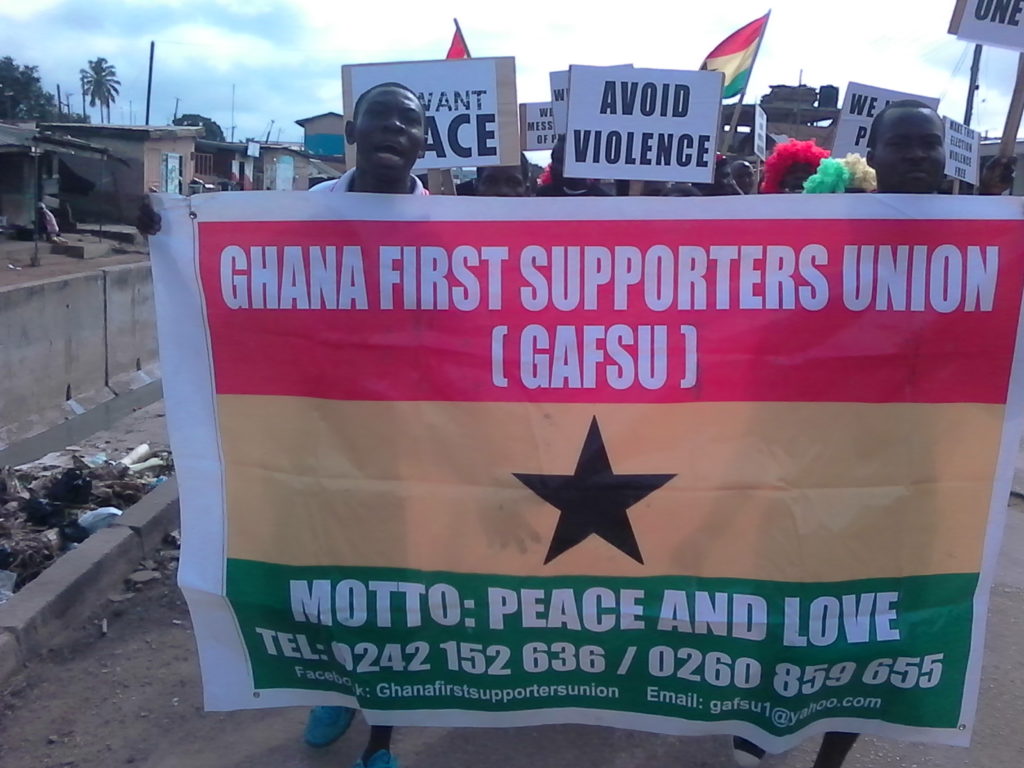 Ghana First Supporters Union(GAFSU), a Nima-based keep fit club,  over the weekend organised a Peace Walk across some selected 'zongo' communities in greater Accra with the aim of preaching peace towards the December elections.

The event, which was aimed at promoting peace across the country with the 'zongos' as the immediate target came off early Saturday morning.

The peace walk started at the Nima roundabout, Mamobi to Accra, Newtown through Kotobabi, and back to the starting point-Nima Roundabout where participants were engaged in aerobics and other health related activities.

According to the President of the union Sani Mohammed,it is about time the 'zongo' youth saw the futility of violence during elections.

"We want the public to know that zongo people are peace-loving people so we are here to tell our brothers that  they should not allow any politician to woo them into any act of crime which only brings shame to the Muslim community."Let nobody go and fight or snatch ballot boxes which may cause them their lives."

"This forthcoming election will not be purposeful without peace.We cannot be fighting and klling each other just because of politics.we need unity to move this nation forward." He added.

The outfit, he said, believed that the greatest wealth is peace and asked that all should come together to promote peace in Ghana.

“The turnout was very impressive and we hope that more of such events would be held to promote peace through exercise,” he stated.

The event, he said, was very successful and called on the youth to  desist from violence and maintain law and order before, during and after the elections.

He however expressed his disappointment in some invited political party leadership who didn't show up for the exercise.

"It is unfortunate all political parties turned down the invitation sent to them to just join this campaign. This shows how disrespectful these politicians are to the Zongo communities. As you can see, no official from any of the political parties is here, we sent invitation to Ayawaso east, west centrel and north and even we were at all their party offices but they  refused to come."

"Nevertheless, the union is still prepared to carry on with its aim of preaching peace to the communities and will continue organizing events like this in   to ensure the call for peace and unity reaches everyone".The Property Officer for the group, Ibrahim Professor emphasized.