Galamsey Fight: We will burn excavators, take us to court - Minister 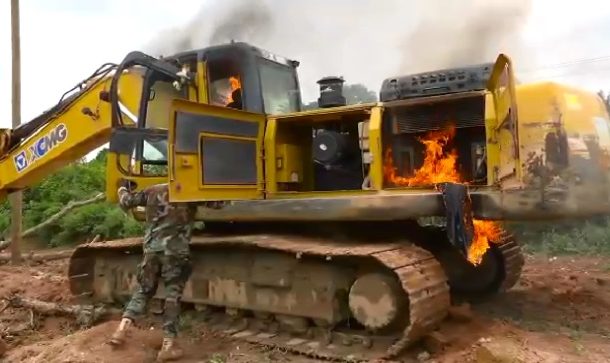 The Minister of Environment, Science, Technology and Innovation (MESTI), Dr Kwaku Afriyie says the government will continue to burn excavators being used for illegal mining when soldiers seize them.

To him, burning the machines is the best alternative to fighting illegal surface mining rather than seizing them.

Dr Afriyie, who is also the Member of Parliament for Sefwi Wiawso in the Western North Region said those who disagree with the move of burning the excavators can take the government to court.

He said going through the court processes to decide the fate of seized excavators will delay and frustrate the fight against illegal mining which is currently destroying water bodies and forests in Ghana.

The President Nana Addo Dankwa Akufo-Addo-led government in April 2021 initiated another fight against illegal mining after the first one started in 2017 faced some challenges.

With this new fight, 200 soldiers were last week deployed to clear all illegal activities on River Pra in the Central and Western Regions.

The soldiers burnt some excavators which were being used for illegal mining and since then, there have been some calls for the government to abstain from burning the machines.

The Minister of Information, Mr Kojo Oppong Nkrumah for instance has said, once, the machines are being used for illegal activities, the government will not hesitate in destroying them.

Pressure group OccupyGhana for instance has faulted the government’s decision to torch the equipment seized at illegal mining sites, saying the method is a brazen illegality that should cease forthwith.

Again, the group says the failure of the security agencies to bring persons arrested for indulging in illegal mining (galamsey) to face the law undermines the whole exercise of fighting the menace.

Describing government’s attempts to fight galamsey as “epileptic and faltering”, OccupyGhana in a statement issued Tuesday, said the attempt “gives the impression that it is unwilling to follow and apply the law.”

According to OccupyGhana, the Minerals and Mining Act provides adequate sanctions, including fines and terms of imprisonment for infractions of the law, and is specific “that equipment used in any of these offences is required to be first seized and kept in police custody. Then, when the person using the equipment for the illegal mining activity is convicted, the court will order the forfeiture of the equipment to the state. Then the Minister has 60 days within which to allocate the equipment to a state institution. There is absolutely no legal room for simply torching the equipment. It is illegal and must stop forthwith."

But reacting in the television interview with Citi TV, Dr Afriyie said he was prepared to put his position as a Member of Parliament for Sefwi Wiawso on the line.

He said burning the machines is the sure way to go and they will not hesitate in doing that in the second wave of the fight against the menace.

Dr Afriyie said: "...under the law, when we go through the process, we confiscate and we give it to state agencies, but me, I don't even want to go through that process because let me give you a parallel example, you know that rhino horns and elephant tusks are very, very expensive items, go to Kenya, when you do poaching and government gets... what do they do? Please answer me. They burn it. You think they cannot sell it on the international market.

"When you get small arms like AK-47, why don't you distribute it to the military, we burn it. When they get excavators, we've tried all sorts of things and they don't work. When they get it, take it from me, Minister Afriyie is saying it, this is not government policy, my personal policy [Sefwi Wiawso MP], they should burn it right in the middle of the forest and look, my thesis is that when you burn 1,2,3,4,5,6,7,  nobody will send them [there].

"Look, I have done that before during Kufuor's time, I was a Minister for Lands and Natural Resources although for nine months, the chainsaw was in operation, I saw that all these legal processes, when you go through it, people have a lacuna, they have a way of getting around the law and when the law catches you, they say release it from the court, you can't do anything. So when I caught these KIA trucks with lumber, I will go and detain them in the Achimota forest in our office there, and under the guise of doing investigations, about six months the lumber was in there and it came to a time that those who operated the KIA trucks had injunction..."