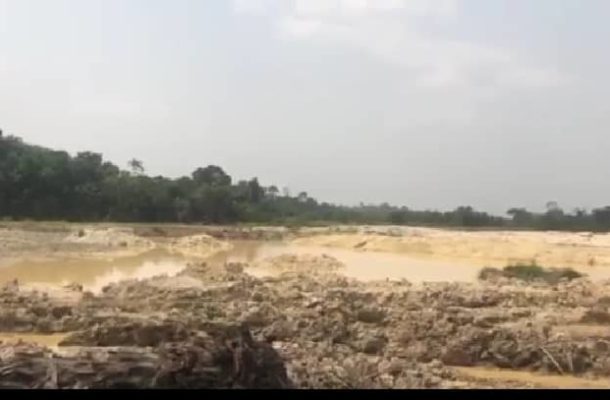 Miners have taken over the land reserved for oil plantation and processing factory in Obuasi under the District One Factory (1D1F) Initiative.

They have destroyed more than half of the land despite 300 acres of palms that have been planted.
In the middle last year, 2020, Mr. Ohene Adu Aboagye, Chief Executive Officer of LEAPAB, the Adansi Traditional Council led by its President, Nana Opagyakotwere Bonsra Afriyie, and government (Obuasi Municipal Assembly) came into agreement to establish a 1,000-acre oil palm plantation and processing factory in the Obuasi municipality under President Akufo-Addo's 1D1F initiative.

The initiative aimed at transforming the economy of the country through industrialization also offer the people of Obuasi employment opportunities in a bid to diversify the local economy.

However, the story today is completely different, the initiative has been turned into galamsey as half of the fertile land has been completely washed away by the illegal miners believed to be Chinese. 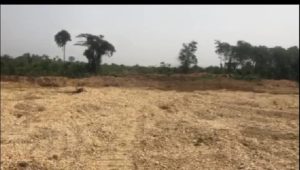 Chief (Odikro) of Adaase, Nana Kwadwo Asamoah in an interview with the press confirmed that the Obuasi, MCE Mr Elijah Adansi Bona deployed the miners to the site last year.

"Adanse Bona came to last year that he was going to use the land for community mining, 3 days later the miners had taken over."

The foreman for the project, Agya Boadi on the other hand revealed that the miners have destroyed almost half of the reserved land despite the 300 acres of palm that have been cultivated for the factory.