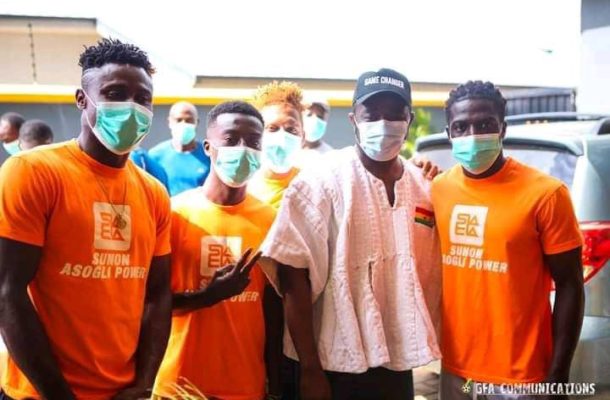 The President of the Ghana Football Association, Kurt Okraku, has charged  Hearts of Oak players to show on the pitch that the club is a mighty team they battle Guinea's CI Kamsar this afternoon.

It comes just few Hours to their one off clash at tha Accra Sports stadium and Okraku, who once served as a management member of the Phobian's want the players to look beyond their domestic double.

The Phobians will take on Guinea’s Club Industriel de Kamsar in a Caf Champions League 1st preliminary decider at the Accra Sports Stadium this afternoon.

They will need to emerge victorious to progress to the 2nd preliminary round in the one-off game, where they will face Morocco’s Wydad Casablanca.

Speaking to the team at their hotel this afternoon ahead of the clash, Okraku said it’s not enough for Hearts to win the domestic double.

“This club deserves trophies and for many years, millions of people have been yelling for trophies.

“It’s taken him (Togbe), it’s taken your (players) efforts, and a good technical team to bring trophies back to this club.

“I’m sure everybody who supports this club will say thank you. We’re grateful for what you guys have done.

“You’ve shown that you love Hearts of Oak, but this is where the challenge comes in. You won the double; you are Ghanaian champions but this is not enough."

The Phobians are back in Africa for the first time in six years, after they were eliminated by Esperance in the 2015 Confederations Cup play off.

Their participation in the  champions League campaign comes after 12 years.

But Mr Okraku believe it's about the time the team picked up the challenge to replicate what they did in year 2000.

He urged the players to understand why they were the selected few to represent a big club like Hearts of Oak.

“Because this club deserves more than a domestic double, that’s why the club enlisted you to compete in the African continent.

“We are here because of the African champions league, and that’s where you belong to.

“You don’t belong to this category on paper, show on the pitch that Hearts of Oak is a mighty team.”

The game between Hearts of Oak and Kamsar is a one off decider in Accra after CAF cancelled the first leg in Guinea due to the military overthrow of President Alpha Conde.

A win for any of the team pitch them against Morocco's Wydad Casablanca at the next stage.