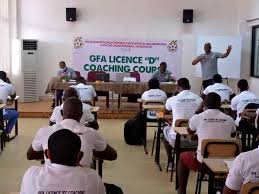 The Ghana Football Association (GFA) License "D" Coaching Course which opened some few weeks ago in Tamale with Sixty-two (62) potential coaches from various districts in the Northern Region has ended successfully.

The course participants were in two batches and after days of intensive theory, practical works and examination, Ninety Percent (90%) of the participants passed and will be awarded the GFA License D. That is 56 of the total 62 participants would be awarded Licence D Certificates.

Out of the 56 who passed, 46 participants are eligible to take the licence C course after two (2) years of monitored practice while 10 passers are not eligible to proceed further.

The remaining 6 participants who could not make the grade will be awarded Certificate of Participation and have the privilege of retaking the course again within a year.

GFA Director of Coaching Education, Professor Joseph Mintah and other Instructors and Coach Educators like Maxwell Konadu, Baba Nuhu amongst others lead the training.

The Licence D Coaching course was to equipment participants on the development of youth footballers, methods of coaching, understanding coaching, administration of first aid and safety among others.

The Licence D course will also be held at the other nine Regional Football Associations.