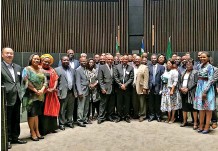 Ghana’s Ambassador to South Africa, George Ayisi Boateng, has hailed the Johannesburg's initiative to engage with African diplomats to boost ties and the well being of their citizens in the city.

A high-level delegation consisting of ambassadors from more than 20 African countries visited the city of Johannesburg this week to discuss diplomatic relations between their countries.

The meeting with the African Diplomatic Corps was held in Braamfontein on Wednesday to discuss matters of mutual interest and to strengthen existing diplomatic relations particularly in the context of migrants’ issues and trade exchange opportunities.

The meeting was called at the instance of Johannesburg mayor Herman Mashaba and council speaker Vasco da Gama and was also attended by mayoral committee members.

He outlined the city’s integration of legal migrants’ policy into communities guided by national legislations such as the Refugee Act of 1998 and the Immigrant Act. The city has also established a Migrant Help Desk to assist migrants.

“I believe that the African community is a vital part of the larger Johannesburg community. In pursuit of the African agenda, we must remain committed to the promotion of human rights and democracy.

“The city is a beacon of culture and migrant programmes are prioritised as key to celebrating our diversity and promotion social cohesion.

"As a centre of choice for heritage tourism, art, cultural and recreational events, the city is involved in organising annual public events that integrate both locals and migrants.”

Ghana’s Ambassador to South Africa, George Ayisi Boateng, thanked the city for hosting them and for creating an understanding of doing business in the region’s biggest economy.