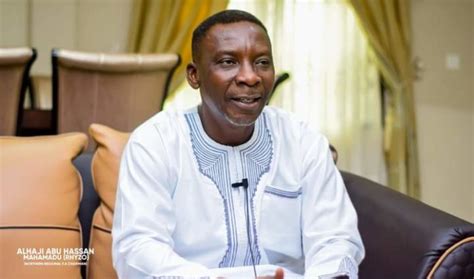 Who ever is not prepared to play in Zone 1 can withdraw. We are getting sick and tired of these baseless accusations from our brethren from the Brong Ahafo.

First they started with the mantra known as “Northern Agenda”. Where they made the world to believe that the northern clubs had ganged up to push one club to the premiership, when in actual fact there was nothing like that.

The refrain changed to that of the Kurt Administration trying to help Tamale City qualify for the Premiership because of the likes of Jones Alhassan Abu. The goal post soon changed when the the Vice President of the Republic made a donation of Ghc100,000 to Real Tamale United. The focus all of a sudden switched to RTU.

When the FA President and the Division One League Board decided to embark on a sensitization tour, the detractors as usual decided to pollute the atmosphere, by putting it out there in BA that Prez Kurt had promised a Northern Team Promotion into the Premiership and so whatever he was doing was cosmetic.

So we are where we are today, because some well known football figures with diabolic intentions have gotten away with baseless and infantile accusations and succeeded in carrying along a gullible following who swallow everything thrown at them without questioning.

These same individuals have received applause here on our platforms without any body questioning them on the veracity of whatever they put out there in the public domain. In Short, these so-called Tin-gods we have created,have succeeded in NOT only building up anger amongst our football following but have also made supporters from the Brong Ahafo region to unconsciously develop hatred for clubs in the northern region. That explains why RTU for instance has been attacked at about 3 venues in BA this season.

This is not the first time RTU has gone on relegation and returned to the premiership. The last time they returned, they didn’t need an alleged Promise from KURT Okraku. He was no where near the presidency then. So why do we think that RTU or for that matter any Northern Club can only gain qualification to the Premiership with the support of an unseen hand?

These are the same people who started the same DIABOLIC AGENDA by trying to sway the public into believing that, Accra Hearts Of Oak was been favoured to win the League when in actual fact the Phobians were actually in Top shape.

Just imagine what the perception and post match commentary would have been like if the FA had suspended Emmanuel Gyamfi and Kotoko had lost that match to Hearts of Oak. Football people must act smart and not allow a handful of people to play on our sentiments with a view to achieving their own parochial interest.

Great Clubs such as Cornerstones,Eleven Wise, Okwahu, Akotex, Dumas, Gihoc, Ghapoha, Fankobaa, Ghanacan, All Blacks, SS 74, Kumapim, Complex Stars, Juantex, Voradep, Susubiribi, Holy Stars, Vipers, Juantex, Kwabibirem and Soccer Missionaries among others have come and gone whilst Ghana Football is still alive. So no Club or group of clubs should be allowed to hold us to ransom. GHANA FOOTBALL will thrive with or without them. Enough is Enough!!!