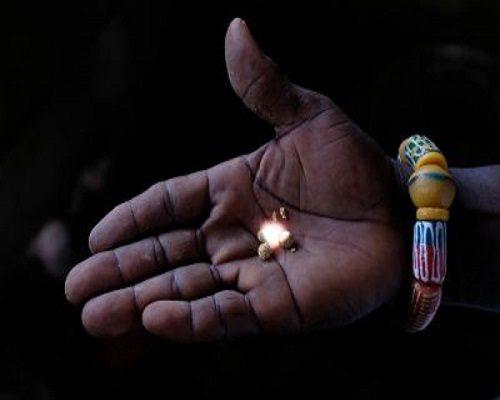 Ghana is Africa’s second-largest gold producer after South Africa and small-scale mining accounts for about 30 per cent of total gold output. The small-scale mining sector was legalised in 1989 for citizens while explicitly forbidding the involvement of foreigners. But since 2010, Ghana has become an attractive destination for foreign gold mercantilists, particularly those from China.

The Chinese miners in Ghana, generally known as the ‘Shanglin gang’, predominantly originate from Shanglin County in Guangxi. Their motivations for moving are varied. While Chinese media sources such as the Guangzhou-based 21st Century Business Herald suggest that Shanglin miners go to Ghana to seek their fortune, some residents of Shanglin blame the Chinese government for encouraging the Ghanaian gold rush.

By 2013, significant growth in the number of Chinese miners triggered persistent hostile media coverage of conflicts between Chinese miners and local communities. That year, the Guardian and the BBC reported on the scale of illegal gold mining activities and published allegations of human rights abuses, sparking national tensions. This led to strong opposition and resentment from the Ghanaian public towards Chinese miners.

In response, the government of Ghana formed an inter-ministerial task force to crack down on illegal foreign miners. According to immigration authorities, the military-style task force had deported 4592 Chinese nationals by mid-July 2013. Despite their efforts, the task force failed to deter and end illegal mining activities entirely.

But a change of government in January 2017 ushered in a more vocal anti-illegal mining campaign, championed by a media coalition and supported by various civil society and faith-based groups. A second inter-ministerial task force was formed with a mandate to enforce a ban on illegal small-scale mining. By August 2018, the task force had arrested over 1370 miners, including 247 Chinese nationals. The media have since reported further intermittent arrests of illegal Chinese miners — in 2019 there were 33 arrests in April, 15 arrests in June, seven arrests in August and 24 arrests in September.

These actions have brought about diplomatic dilemmas for Ghana. For instance, the arrest and detention of several Chinese mineworkers, as well as a police crackdown that resulted in the death of a 16-year-old Chinese miner in October 2012, prompted the Chinese government to express concern over Ghana’s actions. In an attempt to ease diplomatic tensions, meetings were held in 2013 between the government of Ghana and China. The two countries resolved to establish a high-powered working committee to examine the problem and fashion out a roadmap to tackle it.

An emergency meeting between the two countries was held again in 2017 after a further spate of Chinese miner arrests. Unenthused with the outcome and the persistent negative coverage of Chinese involvement in the media, the Chinese Embassy in Ghana issued a strongly-worded statement in April 2017 cautioning Ghana and the media about the negative repercussions this issue could have on Ghana–China bilateral relations.

In response, the government of Ghana reiterated its commitment to ensuring robust ties with China while reassuring Chinese investors that Ghana remains keen to encourage economic cooperation. The government subsequently cautioned against the creation of a non-existent diplomatic row between Ghana and China in the wake of the campaign against illegal mining. The measured response demonstrates Ghana’s efforts to protect its bilateral relationship with China — a country that has become Ghana’s biggest foreign investor and trading partner.

This is not the first time that Ghana has faced a dilemma like this. In 2013, the government expressed concern over retaliatory measures from China after a series of deportations of illegal Chinese miners. The concerns arose from reports of tightening Chinese visa rules for Ghanaians, as well as Ghana’s difficulties in accessing a US$3 billion loan facility granted by the China Development Bank.

Similarly, in 2018 Ghana deported a Chinese woman and her associates for engaging in illegal mining. A government minister in April 2019 implied that the decision to avoid prosecution and instead deport the woman and her accomplices was born from government fear of jeopardising the China–Ghana relationship at a time when billions of dollars of agreements were pending between the two countries. A political backlash forced the President of Ghana to admit in September 2019 that the decision not to prosecute was a mistake on the part of the government.

Ghana faces many difficulties in maintaining good relations with China while dealing with the delicate domestic issue of illegal mining. In both public and media discourses, the conviction is that prosecution of foreign nationals will not only deter foreigners from mining illegally, but also send a clear message of the government’s commitment to fighting against the practice and its associated impact on the environment and human lives.

Conversely, conveniently deporting culprits without trial is not only a mockery of Ghana’s legal system and an act of condoning impunity but also a betrayal on the part of the government whose aim should be to protect the country’s resources and the interests of its people.