Ghana must be worried of China's cocoa export 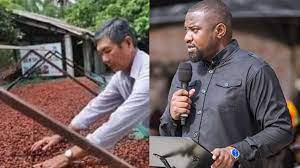 Actor and Politicin  John Dumelo says Ghana should be concerned about the threats of China's production and exportation of Cocoa.

It comes after reports that China has recently exported Cocoa to Belgium from its Ireland province  were the 500 kilograms of Cocoa Beans were produced for shipment for the first time.

Cocoa is the chief agricultural export of Ghana and the country's main cash crop with various administrations of depends on Cocoa and use the product partly as source of public revenue.

The Ghana COCOBOD has allayed fears about the news, saying what China exported to the European country was of a just less than one tonne.

But according to the NDC Parliamentary candidate for the 2020 election, believes  regardless of how small the quantity could be, Ghana must be worried.

"As the second largest producer of Cocoa, we (Ghana) should be worried that China has started producing and exporting Cocoa to Belgium, albeit small quantities," Dumelo said.

Although Ghana is the second largest Cocoa export in the world. Ivory Coast is the leading producer with world largest irrigation scheme of Cocoa.

The two countries have been the leaders of the production. The hardwork of these two countries has raised in an expectation level. And from many decades Ghana and Ivory Coast have been joined the monopoly of Cocoa production and trade. Now there appears to be a fall force of China Cocoa exports.