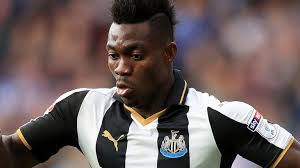 Ghanaian star Christian Atsu slotted in a composed penalty on his comeback from injury as Newcastle Utd beat St Patrick’s Athletic in a friendly this week.

The Magpies are touring Ireland as they bid to get ready for the new Premiership campaign and Atsu has taken centre stage.

Newcastle fans are delighted to have him back in the fold after he missed the final six matches of the 2017/18 campaign following an operation to remove part of the fat pad in his knee. It proved successful and he is now on course to take the Premier League by storm next season.

The Ghana international was afflicted with this fat pad issue for more than three years, and the club managed it via a special fitness programme and injections.

Yet he finally underwent surgery to correct the long-standing problem earlier this summer, and he has made encouraging progress during his rehabilitation.

He was expected to be out for three to four months, but he recovered quicker than expected and he has looked lively in training.

“My target is to get my knee fit and stronger than before,” he said.

“Most of the time when you do surgery, if you don’t listen to the doctor’s instructions then you will have problems in the future. I don’t want to have these kind of problems again. I want to keep the knee stronger so in the future I can be even better.

"I can assure you that 100 per cent I will be better than last season for sure. I believe that when I’m playing, the fans will see a big difference in me.”

Atsu was once one of the world’s most highly rated young players, and that convinced serial Premiership champions Chelsea to shell out £3.5 million for his services.

He enjoyed loan spells at Vitesse Arnhem, Everton, Bournemouth and Malaga before joining Newcastle for the 2016/17 campaign.

He impressed with his work ethic, his physicality and his dynamism on the ball, while he also hit five goals as the Magpies were promoted back to the top flight.

Manager Rafa Benitez was so impressed that he shelled out £6.5 million to sign him permanently on a four-year deal in May 2018, a hefty investment for a club like Newcastle.

“We are happy to sign a good player,” said the Spaniard, who has previously managed Liverpool, Chelsea, Real Madrid, Napoli and Valencia.

“He’s shown us that he’s a good professional and someone who is very keen to learn and improve. Christian has been a key part of our promotion campaign and he wants to help us to build something for the future.”

He is a popular player of Tyneside, and he played his part in guiding Newcastle to an impressive mid-table finish in the Premiership last season, but he has never quite delivered on his vast potential. Fans will now hope to see the best of him after the surgery to correct an ailment that held him back for so long.

The early signs are encouraging, as he looked lively throughout that friendly against St. Patrick’s Athletic, and he was trusted with the spot kick, which he successfully dispatched to lead his team to a 2-0 victory.

The Magpies begin their 2018/19 campaign with a tricky game against Tottenham Hotspur. They will be desperate to make a strong start to the season, but a Betonline review will show you that Newcastle are the clear underdogs with reputable bookmakers in this game.

They will need Atsu to be firing on all cylinders if they are to stand a chance of success, and he has demonstrated that he could well be ready to take the league by storm, so they could spring a surprise in this one.