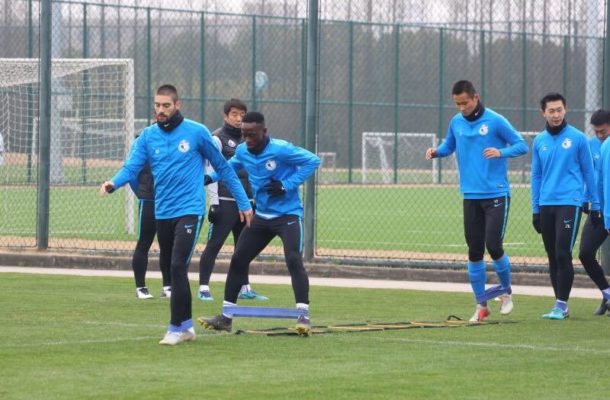 Ghana striker Emmanuel Boateng has trained for the first time with his new club Dalian Yifang.

The striker joined the Chinese Super League side last week in a big money move from Spanish side Levante.

Boateng joined his Dalian Yifang teammates in Shanghai to begin preseason exercises as the team prepares for the upcoming Chinese Super Lig season.

The Black Stars striker is expected to spearhead coach Bernrd Schuster's attack as they seek to finish in the top ranks this season.

The Blue Hawks finished the 2018 season in 11th position and will begin the campaign against Henan Jianye on Sunday.

Boateng started his European career when he joined Portuguese side Rio Ave in 2013, after impressing on a trial, from hometown club Charity Stars FC.

He shot to international prominence by destroying Barcelona last season with a hat-trick that broke the unbeaten record of the Catalan giants.