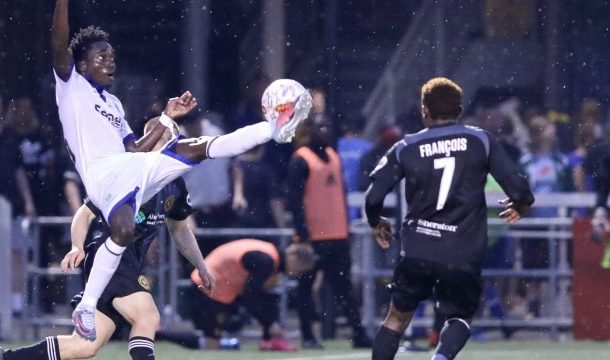 Ghana trio Frederick Opoku Yamoah, Isaac Osei and Prince Baffoe featured for Penn FC as they continued their fine form with a 1-1 stalemate in their away game against Indy Eleven in the USL.

Opoku Yamoah played the full throttle of the game and played a part in the build-up to the first goal.

His clever flick  found Aaron Dennis in front of the Indy back line. Dennis laid the ball off to Mkosana and peeled off his defender.

Mkosana returned the ball to Dennis on a chipped through ball, releasing him behind the Indy back line.

Indy center back Karl Ouimette, struggling to keep up with the pace of Dennis, dragged the Penn FC forward down in the box resulting in a penalty kick and a yellow card.


The red-hot Mkosana stepped up and powered the shot into the top right corner, giving Penn FC the 1-0 lead.

Isaac Osae joined the play at the Lucas Oil Staiumd in Indianapolis, Indiana in the 55th minute and nearly added a cushion for Penn FC.

He megged Ouimette on his way towards the box and Ouimette fouled the Ghanaian forward. The official pulled a second yellow card for Ouimette and sent him off in the 76th minute.

However, despite the man disadvantage, the home side found an equalizer five minutes later.

Prince Baffoe also came on in the 83rd minute and saw the rest of the game.