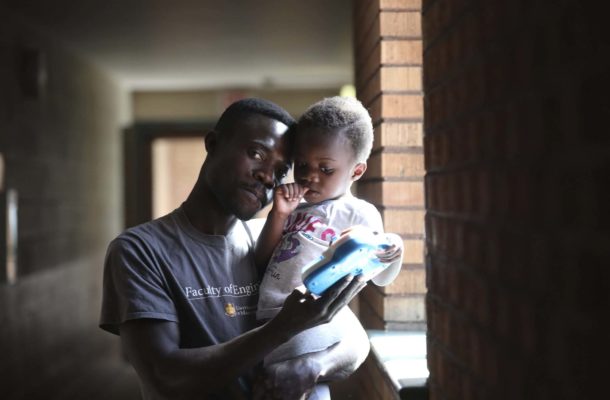 Photos of Ben (can't provide last names), from Ghana and his 2-year-old daughter Blessing at his apartment in the west end. Ben is now in Canada by himself with his little girl after trying to claim asylum in the US where Blessing's mom was deported back to Ghana.

The single dad speaks no English and his two-year-old daughter cries much of the time. The pair from Ghana stay in a third-floor apartment in Winnipeg’s West End, where they’ve lived for several months with no social contact or connections with the community.

He knows Sunday is Father’s Day, but as an isolated refugee claimant stuck in limbo with no status, who’s caring for a toddler who constantly cries for her mother, he’s not expecting much.

“I’m hoping something will happen,” he said through an interpreter as Blessing squirmed and fussed when he tried to interest her in a book called I’ve Lost my Yellow Zebra.

They can only be identified by their first names — Ben and Blessing — because if their refugee claim fails and they’re removed to Ghana, where he says his life is in danger, the publicity will put them in peril.

“If I go back, I’m in trouble,” he said in his Twi language. Ben and Blessing and her mother, Rose, flew from Ghana to Ecuador last year and made their way by land to Mexico.

When the family crossed at Tijuana into the U.S. to make a refugee claim, the men were separated from the women and taken to separate detention facilities.

Ben had been carrying Blessing, and the father and daughter were sent to an Immigration and Customs Enforcement (ICE) lockup for men in California, he said. Rose, he discovered, was deported back to Ghana.

He and his toddler were held in what he described as a dormitory-like men’s prison, where he changed Blessing’s diapers on their bunk.

After two weeks in immigration jail, Ben and Blessing were released and expected to be removed to Ghana.

The danger he faced going back to Ghana, he said, was worse than their separation from Rose. He became Blessing’s main caregiver — a nontraditional role for men in Ghana, he

Tsaid, and one that’s been a challenge. They headed for Canada, and on Jan. 20, they crossed the border into Quebec to ask for refugee protection. Ben said he heard good things about Winnipeg and he and Blessing boarded a bus heading west. He got social assistance and legal aid. His lawyer said no date has been set for their Immigration and Refugee Board hearing, but he hopes it’s soon.

“I have serious concerns about the father, the child and the mother,” immigration lawyer Alastair Clarke said.

“In my personal experience with the father and child, they have genuine fear of returning to their home country. He has limited support and extremely limited language skills. He is working hard to request the necessary documents for his case, but he clearly needs to focus on taking care of his daughter,” Clarke said. “I also have significant concerns about the health of the mother. Separating a mother from her young child is a tragedy.”

Their case is among the soaring number of refugee claims before the Immigration and Refugee Board, he said. Claims filed in 2017 were almost double the number filed in 2016.

“This is an unusual situation,” Clarke said.

“I cannot recall representing a single dad with a young child. The fact that the mother was separated is a serious injustice.” If Ben and Blessing are granted refugee protection, Rose should be able to join them. For now, Blessing, who is still in diapers at 30 months old, looks forward to a daily video chat with her mom in Ghana via smartphone.

“In this case, we may request to have his hearing expedited,” Clarke said.

In the meantime, Ben may be getting his Father’s Day wish that “something will happen.”

When contacted by the Free Press this week, Ghanaian Union of Manitoba president Maggie Yeboah reached out to them.

The Twi-speaking woman has taken many Ghanaian asylum seekers under her wing.

She planned to visit them and invite them to the 50th anniversary celebration and barbecue at her Crestview Free Methodist Church, which is attended by many Ghanaian community members.