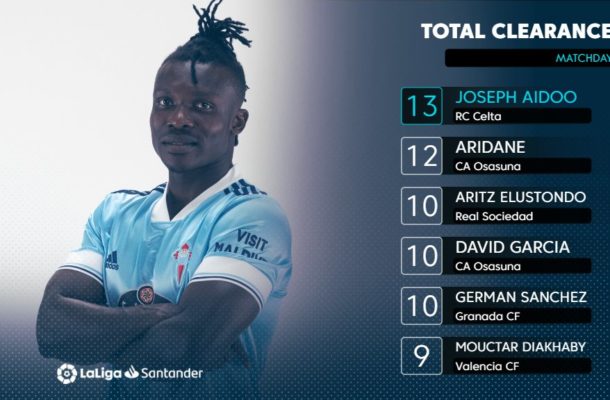 Ghanaian international Joseph Aidoo has started his second season in the Spanish top flight in an explosive fashion, topping the chart for most clearances in the La Liga Santander.

The 24-year old defender has played the full throttle in both of Celta Vigo’s two matches of the 2020-21 campaign, helping them to secure  an opening day goal-less draw at Eibar and a 2-1 home win over Valencia.

Aside helping his side secure four(4) out of a possible six(6) points since the start of the campaign, Aidoo also tops the chart in terms of clearance made so far this season, racking up an impressive tally of 13 clearances.

Osasuna Defender Ariadne follows him closely in the chart with 12 followed by Real Sociedad’s Aritz Elustondo with 10.

Aidoo’s Celta Vigo will next travel to face Real Valladolid on Sunday September 27, 2020 and the Black Stars defender is likely to in the thick of affairs once again.