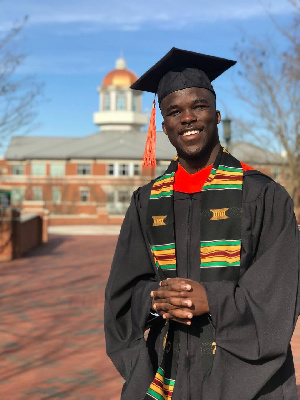 A young Ghanaian engineer based in the USA, Andrew Amuna, has been reported dead.

He is reported to have drowned at the Granite Point Snake River near Pullman County, Washington State, USA.

The young engineer was first posted by journalist, Israel Laryea, as he celebrated his feat.

“Yes, it’s true. Andrew Amuna, 27 is no more. The young Ghanaian engineer drowned at the Granite Point Snake River near Pullman County, Washington State, USA where he had joined a colleague on a fishing expedition, Saturday afternoon,” Pullman Radio reports.

According to the radio station's article, Whitman County Sheriff’s Deputies were called to the scene West of Pullman around 4:30.

The 911 caller reported that the male went missing after being in the water near the shoreline.

Authorities searched the water in boats and jet skis before calling in the Nez Perce County Sheriff’s Office Dive Team.

Divers located the male deceased in 9 feet of water about 10 feet from shore.

It was only a week ago that Andy moved to Washington State from North Carolina after he was transferred by the company he is working with, Schweitzer Engineering Laboratories.

The body was transported to the King County Medical Examiner’s office Monday, July 26 for autopsy, July 27.