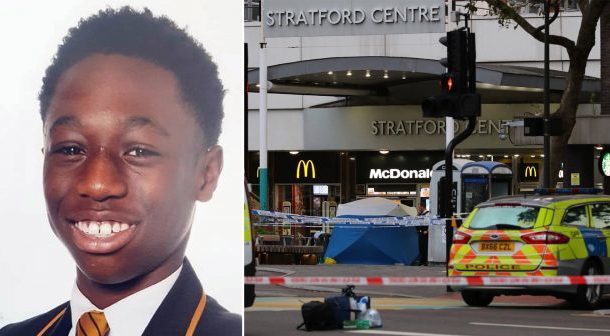 Baptista Adjei was stabbed while returning home from school

A Ghanaian aspiring footballer has been stabbed to death in a 'senseless' knife attack in London, UK.

He was murdered in cold blood alongside his friend, also 15 years but he remains in hospital in a stable condition, according to cops.

Baptista Adjie was wearing his school uniform when he died in daylight outside a McDonald’s in Stratford, East London on Friday.

The victim, from Woolwich, southeast London, had called his mother to say he was on his way home minutes before he was attacked at 3.20pm, his family said.

Police believe Baptista may have been stabbed during a fight on a bus near the scene of his death.

On Friday night a 15-year-old boy was arrested on suspicion of Baptista's murder after handing himself in at an east London police station.

Baptista’s aunt, Aretha Adjei, told the Evening Standard her nephew was a “fun-loving boy, very popular with everyone in Church”, who would “always make you laugh”.

“He was a nice boy, the fact that he died in his school uniform is horrific,” she added. “He had just closed from school. He spoke to his mum on the phone about coming home after popping in to McDonald’s with a friend. Twenty minutes later he was stabbed to death.

“His mother is not coping well. You can’t imagine her pain.”

Police and witnesses said the teenager’s friends and passers-by went to help after he collapsed in a pool of blood.

One bystander, who did not want to be named, said: “I could see him all covered in blood. He was in pain and tried getting up.

“There were people around, gathering. It was scary as you did not know if any of them could have had a knife too.”

Det Ch Insp Chris Soole said: “This was a senseless attack and we share the concern and alarm this murder will no doubt cause in the local community.”

In a separate attack on Thursday, an 18-year-old was fatally stabbed in a park in Camberwell, south London.

Police found him injured on the Brandon Estate at 8.20pm and he died at the scene an hour later.

No arrests have been made.

At least 114 murder investigations have been launched in London this year, more than at the same point in 2018.

There were 132 violent killings in the capital last year, the highest figure in a decade.