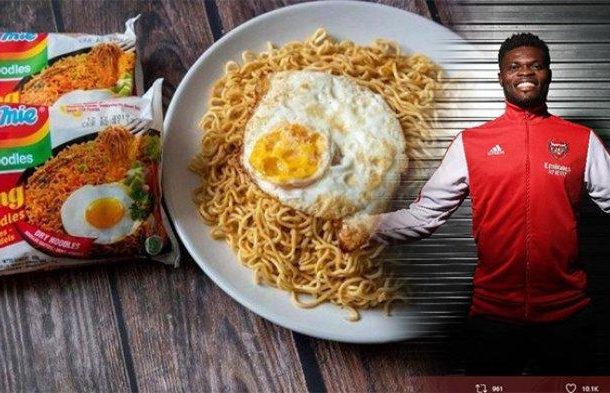 Arsenal and Ghana midfielder Thomas Teye Partey has revealed that instant noodles common referred to as Indomie in Ghana took all his money growing up.

In an interview he revealed that girls in Ghana always demanded indomie as soon as you propose love to them so they squandered his money a lot growing up in his native home in Ghana.

The vice captain of the Black Stars of Ghana made the tasty revelation in an interview with Malaysian broadcaster Stadium Astro.

Partey said: "You get a new girl in Ghana, and they say: 'Buy me Indomie.'  Every day, 'Indomie, Indomie.'

"That food took all my money! It takes all the guys' money in Ghana.

"Have I a favourite flavour?  Oh, my God, all the flavours are good.

"Maybe I can become an ambassador for Indomie.  Then I will get it for free."

The 27 year old midfielder joined Arsenal from Athletico Madrid for 5omillion euros in the summer but his Arsenal career has been blighted by niggling injuries.