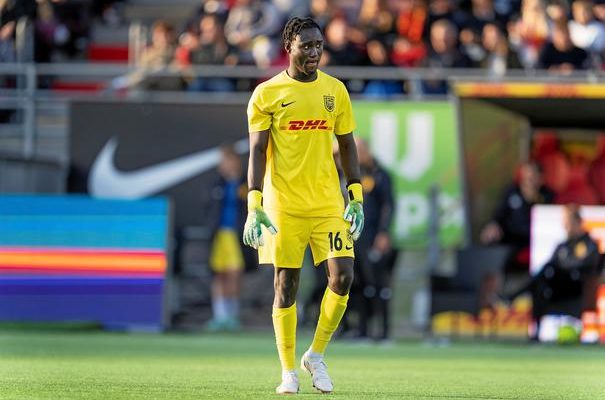 Ghanaian goalkeeper Emmanuel Ogura was handed his debut by Danish side FC Nordsjaelland in their hammering of FC Copenhagen,

He became the first Right to Dream goalkeeper to play first team football for FC Nordsjaelland . It was a hectic experience for the 19-year-old Ghanaian who conceded five goals on his debut.

"It feels really nice! I'm very happy that I've now got my first first team match. It's incredible. It all got a bit hectic, but I'm very happy to debut in the Super League.

There were less than 20 minutes to kickoff when he was told to get ready for the game as number 1, Dudu, got injured during the warm-up and then the Ghanaian goalkeeper had to prepare quickly and pull on the yellow goalkeeper jersey with number 16 on his back.

"Marco (Knoop, goalkeeping coach) asked me to get ready because maybe I should start inside, but to be honest, my focus was first and foremost on Dudu as I wanted to make sure he was okay." he told the FC Nordsjaelland website.

"Then I continued my warm-up as usual. I felt ready because I always set myself up for match start if anything happens now. So I felt well prepared and was not really nervous.

The young goalkeeper especially praises goalkeeping coach Marco Knoop for supporting him before the start of the match, where he also got advice along the way from the squad's older and more experienced players.

"I got a lot of support from Marco who gave me a lot of advice and told me he believed in me. He really gave me the energy to step up. And I also had some good talks with Kian Hansen and Mads Døhr, who helped me feel comfortable."

Oguras was, almost in the most literal sense, thrown to the lions in his debut fight. It was FC Copenhagen that stood on the other side of the center line for Sunday's match, where there were also packed stands and good slaps on the fans at both ends of Right to Dream Park.