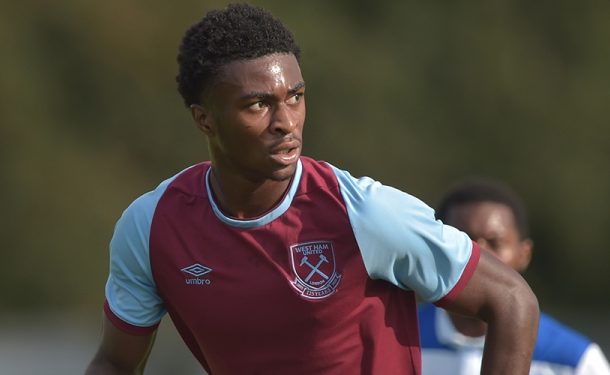 English-born Ghanaian forward Sean Jordon Adarkwa has ended his services at West Ham United following the expiration of his contract.

He will no longer be part of the Hammers' plans going into the 2021/22 season.

The English Premier League side have offloaded the 20-year-old attacker after a four-year stint at the club at junior level.

Adarkwa failed to impress at the West Ham United U23 team in the just ended season after making 17 appearances for the club in all competitions with no goal to his credit.

Pacey, powerful and prolific in front of goal, versatile forward Sean Adarkwa became a full-time scholar at the West Ham United Academy of Football in July 2017.

Growing up close to Barking, Adarkwa first joined West Ham United at eleven years of age, starting his career as a winger before beginning to regularly featuring as a striker at Under-16s level.

The teenager appeared 17 times in U18 Premier League South as a first-year scholar in 2017/18, starting eleven games and scoring two goals.

Adarkwa continued that form with a breakthrough season in 2018/19, making his Premier League 2 Division 1 debut as a substitute at Swansea City on 29 January 2018 and continuing to impress sufficiently to be given regular opportunities at U23 level, while still scoring three times in eight games for the U18s.

A nomination for the Dylan Tombides Award and a first professional contract with West Ham United duly followed in the summer, but an opening-day injury for the U23s in 2019/20 led to Adarkwa missing much of the first half of the campaign.

When he recovered in January 2020, the striker scored three times in three Premier League 2 Division 2 starts to kickstart his return to action, prior to the campaign's early curtailment.

Adarkwa is eligible to represent either Ghana or England in future.