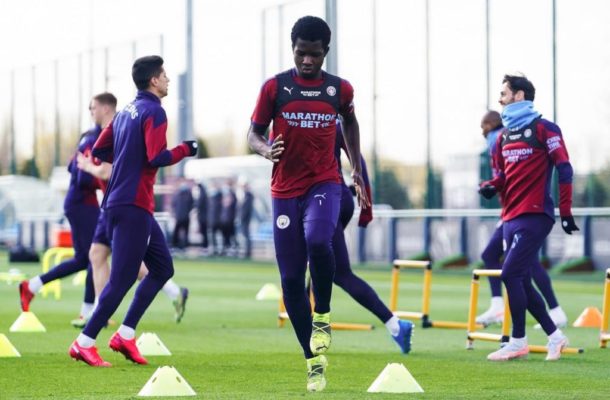 Ghanaian teenager Kwaku Oduro has been offered the opportunity by Manchester City coach Pep Guardiola to train with the first team squad ahead of this evening's Champions Leagu tie against Borussia Dortmund.

The promising 18-year old prodigy has been promoted to train with the senior team from the Under-18 side following a series of impressive performances this season.

Oduro is currently eligible to play for England or Ghana  and  has been very impressive after featuring in 18 matches with two assists at the under 18.

He trained with the Manchester City senior squad on Tuesday morning with the likes of Kevin De Bruyne, Bernardo Silva, Sergio Aguero among others before the team departed England for Germany.

He is a center back by trade but can also play at right back and also as a defensive midfielder and will be hoping to catch the eye of Pep Guardiola very soon.

Oduroh has progressed through the City's academy from Under-9's to the Under-18's squad, signing as a scholar in July 2019.