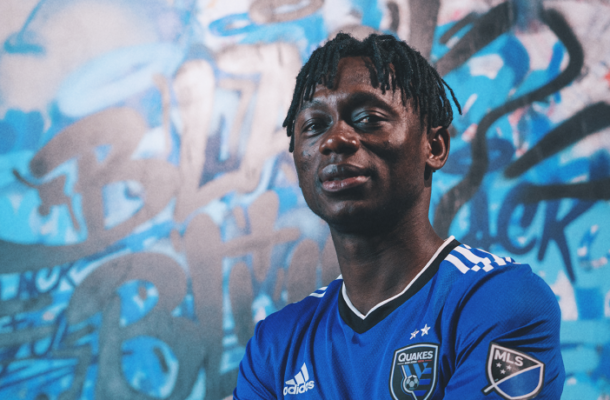 American top-flight league side San Jose Earthquakes have announced the signing of Ghanaian midfielder George Asomani for their 2021 season's campaign.

Asomani who was a second-round MLS SuperDraft selection has signed a one-year contract with club options for 2022, 2023 and 2024.

The 22- year-old Ghanaian, will not be placed on the club’s active roster and therefore will not occupy an international roster slot, the California-based side said.

“We felt fortunate to be able to select George in the second round of the SuperDraft and believe he has promising qualities we can build on,” said Earthquakes general manager Jesse Fioranelli.

“After the draft, he concluded the 2020-21 season with North Carolina State before arriving in San Jose and impressing with his work ethic and athleticism. We intend to be patient with George’s development and want to accompany him as he continues to grow at the MLS level of competition.

“We would like to acknowledge NC State’s support, in particular coach Kiefer, for helping pave George’s collegiate pathway to a unique life perspective. We know his college degree and the opportunity to go pro means a lot to George and his family in Ghana.”

Asomani, 22, was selected 39th overall in the 2021 MLS SuperDraft. He spent two years at North Carolina State University, tallying one goal and one assist in 32 appearances (all starts) across the 2019 and 2020 seasons.

Asomani was named to the 2019-20 ACC Academic Honor roll and also the Preseason All-ACC Watchlist in 2020.

Additionally, he led the team to its third consecutive NCAA tournament appearance for the first time since 1992.

Prior to NC State, Asomani played two seasons at Monroe College in New York, where he was a two-time NJCAA All-American and the 2018 Regional Championship Player of the Year.

The San Jose Earthquakes are an American professional soccer team based in San Jose, California. The Earthquakes compete as a member club of the Western Conference of Major League Soccer.