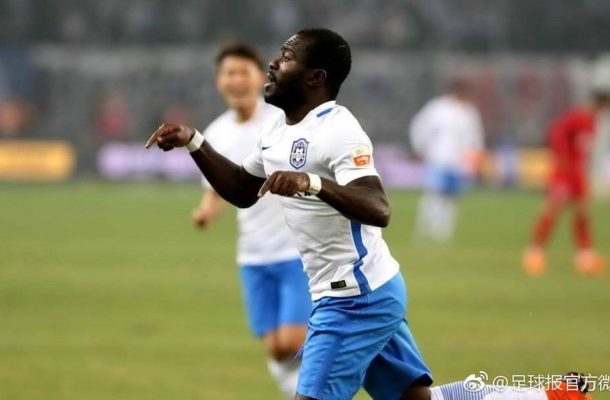 Ghanaian forward, Frank Acheampong was in sensational form, scoring a hat-trick for Tianjin Teda in a friendly win ahead of the start of the Chinese Super League in next month.

Teda was divided was divided into two teams for the friendly encounter with the main group winning 6-1 on Tuesday.

The former RSC Anderlecht star was joined on the scoresheet by midfielder Che Shiwei- who registered a brace with defender Zheng Kaimu scoring the other goal.

The video of the whole game was recorded and sent to head coach Uli Stielike, who is yet to join his team following the coronavirus break for purposes of updating the team’s training plan.

Acheampong made 30 league appearances for Teda, scoring nine goals and providing nine assists as they finished 7th on the league table last season.

The Ghanaian international scored a league-record 17 goals for the club in his first full season last season to help Tianjin Teda survive relegation.