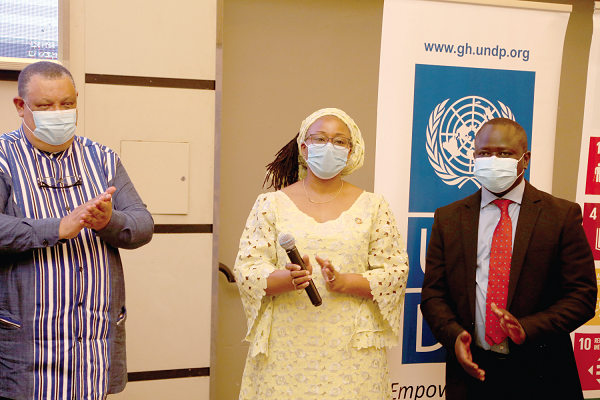 The HDI is an average measure of basic human development achievements in a country which assesses long-term progress in three basic dimensions of human development, namely: life expectancy, access to education and decent standard of living.

The report, nonetheless, projected that Ghana was likely to experience a reversal in human development for the first time in 30 years in the 2021 Human Development Report (HDR) due to the negative impact of the COVID-19 pandemic on all facets of development this year.

The findings of the report were disseminated at a conference organised by the UNDP Ghana in Accra last Wednesday.

This year’s report, which marks the 30th anniversary of the UNDP’s HDR, is titled: “The Next Frontier: Human Development and the Anthropocene”.

He noted that the 2019 HDI analysis had been adjusted to include two more elements: a country’s carbon dioxide emissions and its material footprint, described in the report as “planetary pressures”.

“The report shows that Ghana is doing very well. Ghana’s educational component has been going up, as well as the income component and life expectancy. What we need to do is focus more on the other components, which are planetary pressure and gender inequality,” he said.

Mr Mugisha said although the full impact of the COVID-19 on human development progress was yet to be established, the 2021 report was projected to record a downturn in Ghana’s 2020 HDI performance.

Reacting to the report, the Resident Representative of the UNDP in Ghana, Dr Angela Lusigi, expressed concern that although the share of Ghanaians living in poverty had fallen, issues with environmental degradation and climate change lingered.

She said the time had come for Ghana to “make the right choices” for equitable and lasting prosperity for all across generations.

“In 2017, environmental degradation cost the Ghanaian society up to $6.3 billion, equivalent to 10.7 per cent of GDP. By 2030, 400,000 additional people could fall into poverty because of climate change. This is important because Ghana’s people and the economy still rely heavily on natural resource for jobs, livelihoods and services,” she said.

Dr Lusigi commended the government for its “comprehensive response” to the COVID-19 pandemic and the implementation of the Ghana COVID-19 Alleviation and Revitalisation of Enterprises Support (Ghana CARES) programme to mitigate the impact of the pandemic on businesses and livelihoods.

The Government Statistician, Professor Samuel Kobina Annim, revealed that the 2021 Population and Housing Census would also collect relevant data on the environment, including sanitation, to guide planning, as well as policy formulation and implementation.

“Unlike the housing component that we had from the 2010, from 2020 we are going to get data that will help us better understand, for instance, how to distinguish between the interface and the containment of the toilet facilities that we use. This is the richness of the data that we are bringing to the fore as far as the 2021 Population and Housing Census is concerned,” he said.