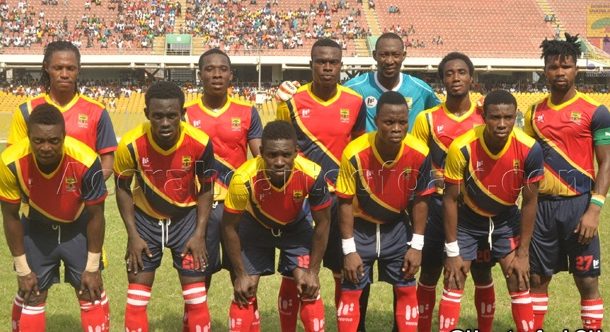 Hearts of Oak will host Medeama at the Accra Sports Stadium in mid-week game 28th of the Ghana Premier League fixture.

Ollenu Ashitey, Cosmos Dauda, Eric Kumi, and Thomas Abbey are likely to be back for the Medeama game but Robin Gnagne and Richard Yamoah are not match fit.

The Phobians ended a run of seven games without a win, beating Ebusua Dwarfs by a lone goal, and they will be hoping to finish their final home game of the season with a positive result against Medeama in midweek.

Yaw Preko earned a first win in his first game as the new acting head coach of the club, following in the footsteps of Mohammed Polo, who also won against Dwarfs in his first game in charge in the 2013/14 season.

Preko was a pleased man after guiding the team to victory over Dwarfs but he has turned his attention the midweek game against Dwarfs and reveals the fans have to come and support his players.

“The Medeama game is going to be tough and we are going to work,” he said.

“We still have a little time and we are going to work very hard and then we hope for the best. The fans should come again on Wednesday to come and support the boys. Without the fans, we cannot do what we do best so I am expecting the fans to come especially those who were not here on Sunday and hopefully, we will work very hard again and get the maximum point on Wednesday.”

Hearts have not hosted Medeama at the Accra Sports Stadium in three years.

The Phobians have played the Tarkwa-based side home-away-from-home in the last two seasons.

Their meeting in the 2013/14 season saw Medeama pip Hearts at the Cape Coast Stadium, but last season the two sides shared the honors in a classic 2-2 drawn game at the Essipong Sports Stadium.

Medeama run away 3-1 winners against Hearts on their last trip to the Accra Sports Stadium in the 2012/13 season.

The Mauves-and-Yellow were on the losing side, for the first time at home to Hearts, in the first round.

Cosmos Dauda and Eric Kumi scored in the second half to help Hearts to a maiden victory at the TNA over Medeama in the second game of the season.

Medeama have been Ghana’s flag-bearers in the CAF Confederation Cup this season, and having chalked many august victories in 2016, will be looking to add Hearts to their list of casualties.

But they have drawn their last two games whilst Hearts would be hoping to end the season on a very high especially playing their final home game of the 2016 campaign.