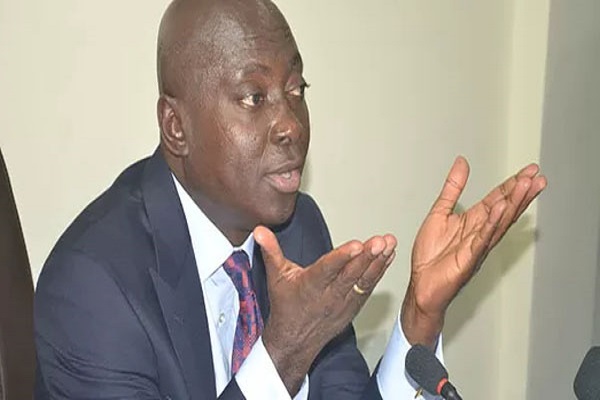 In the absence of evidence, the truth is always said to be a lie. That would have been the case of this Saglemi Housing brouhaha but for the timely intervention of an irrefutable intercepted documentary evidence from state-owned institutions in the country. The Works and Housing Minister, of the current administration, Honourable Samuel Atta Akyea also Member of Parliament for Abuakwa South Constituency is vindicated!

On Thursday, June 4, 2020, Honourable Atta Akyea, in response to questions on the floor of Parliament revealed: “on the 27th day of February, 2014, the then Minister for Water Resources, Works and Housing, Honourable Collins Dauda, MP, on his own motion, rubbished the parliamentary approval and reviewed the original agreement and signed his own First and Restated Agreement with Messrs Construtora OAS Ghana Limited to downsize the number of houses to be constructed from 5000 to 1,502 housing units with the same contract sum of 200 million US Dollars.”

However reacting to this fact on UTVs ‘Critical Issues’ (a morning show hosted by Afua Pokuaa) on Saturday June 7, 2020, the Member of Parliament for Bodi, who was the Deputy Minister for the then Water Resources Works and Housing Minstry, Hon. Sampson Ahi said “if you don’t yet have the report, why make allegations? This shows he was just engaging in politics…no one gave the contractor 80 million US Dollars, that claim from the Minister, Atta Akyea is factually inaccurate.” He added, “because of politics, they are not even going to find out for themselves what is happening on grounds.”

Now in other to appreciate the Saglemi Housing Brouhaha, this is a quick background to the entire project. In 2002, the then Ministry of Water Resources, Works and Housing (MWRWH), acquired a parcel of land, measuring 2,172 acres situated and lying at Saglemi, near Ningo within the Dangme-East District of the Greater Accra region as one of its land banks for the construction of Government affordable housing units. This land was allocated to Messrs Construtora OAS Ghana Limited for the construction of 5000 housing units.

On the 15th day of August 2012, checks have it that His Excellency, President John Dramani Mahama, the then President of the country granted executive approval to the MWRWH for the construction of the housing units.

On Wednesday, the 31st day of October, 2012, Parliament granted approval for the construction of 5000 housing units by Messrs Construtora OAS Ghana Limited with a buyer’s credit of 200 million US Dollars.

On the 4th day of January, 2013, MWRWH signed an Engineering, Procurement and Construction agreement with the construction's company.

A number of paper works continued to go on until it got to the implementation stage. On the 10th day of January, 2013, the Ministry of Finance informed the MWRWH that, Messrs Credit Suisse International had disbursed a total amount of US$198,450,000, being US$200 million less fees and transaction expenses of US$1,550,000 into the Escrow Account at the Bank of Ghana.

Now, this is where the real issue is; the basis for the Minister’s claims on the floor of Parliament.

A fantastic sum of US$80m, representing 40% of the contract sum was paid as mobilization to the contractor when actual work had not started. Immediately the sum was released to the contractor, he transferred US$40 million abroad.

The following intercepted document proves that everything said by the Hon Atta Akyea was truthful and candid: 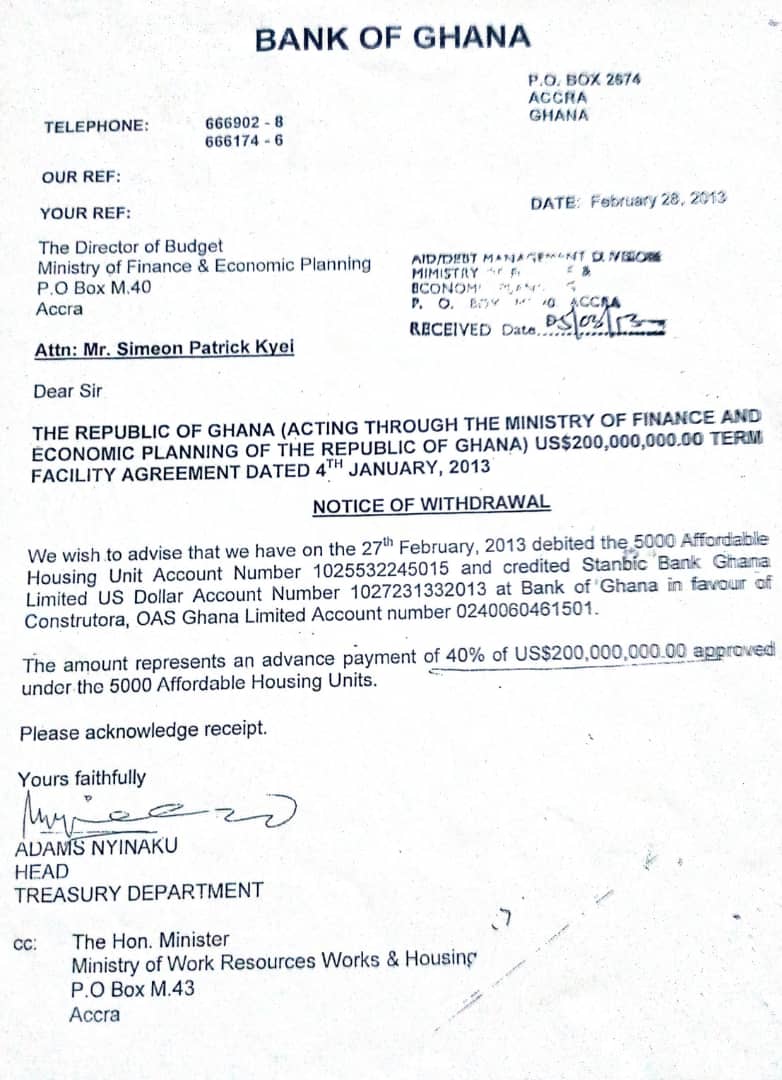 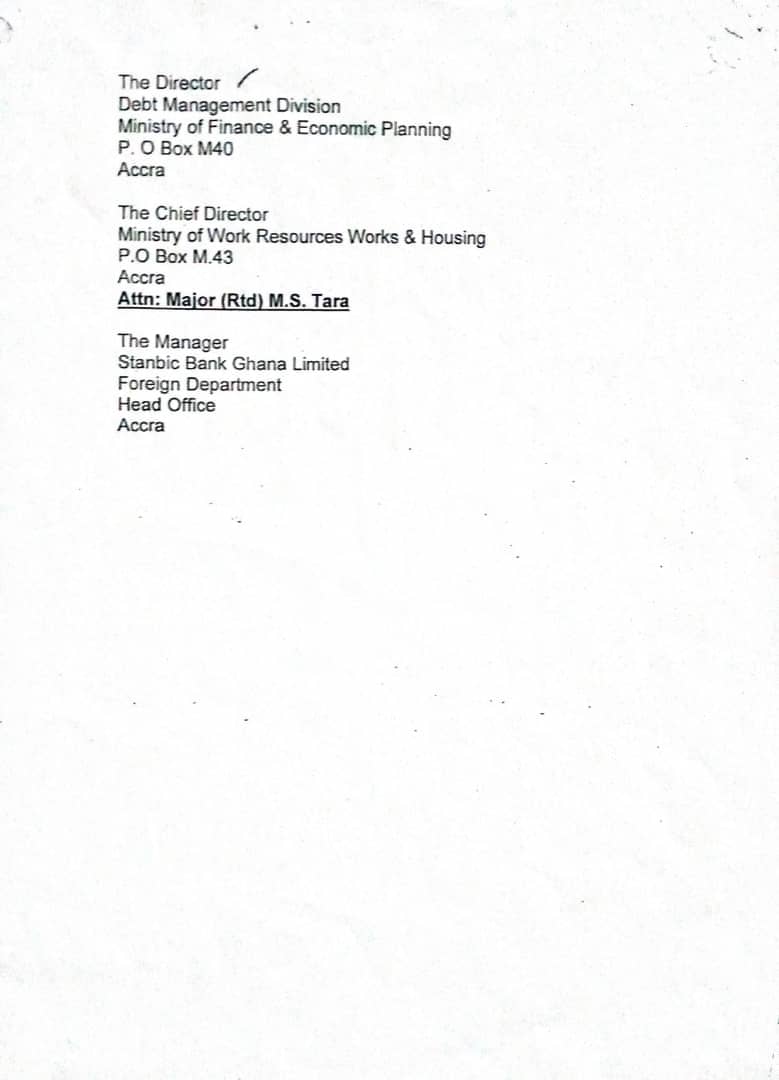 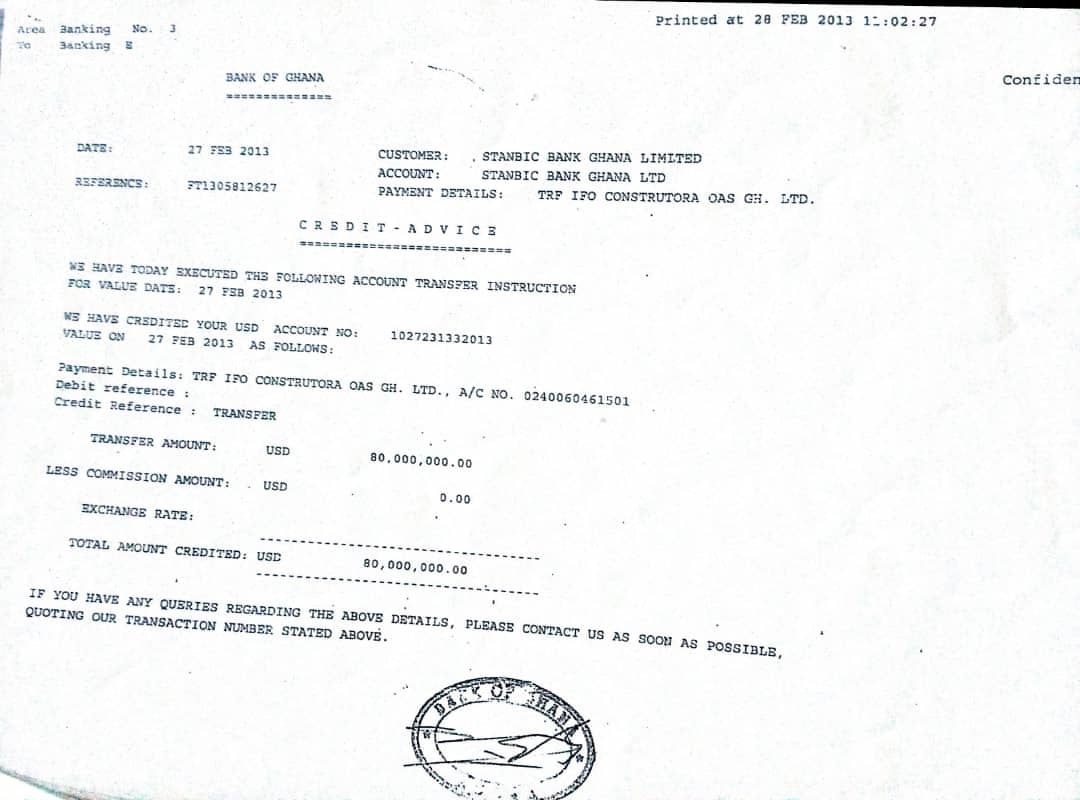 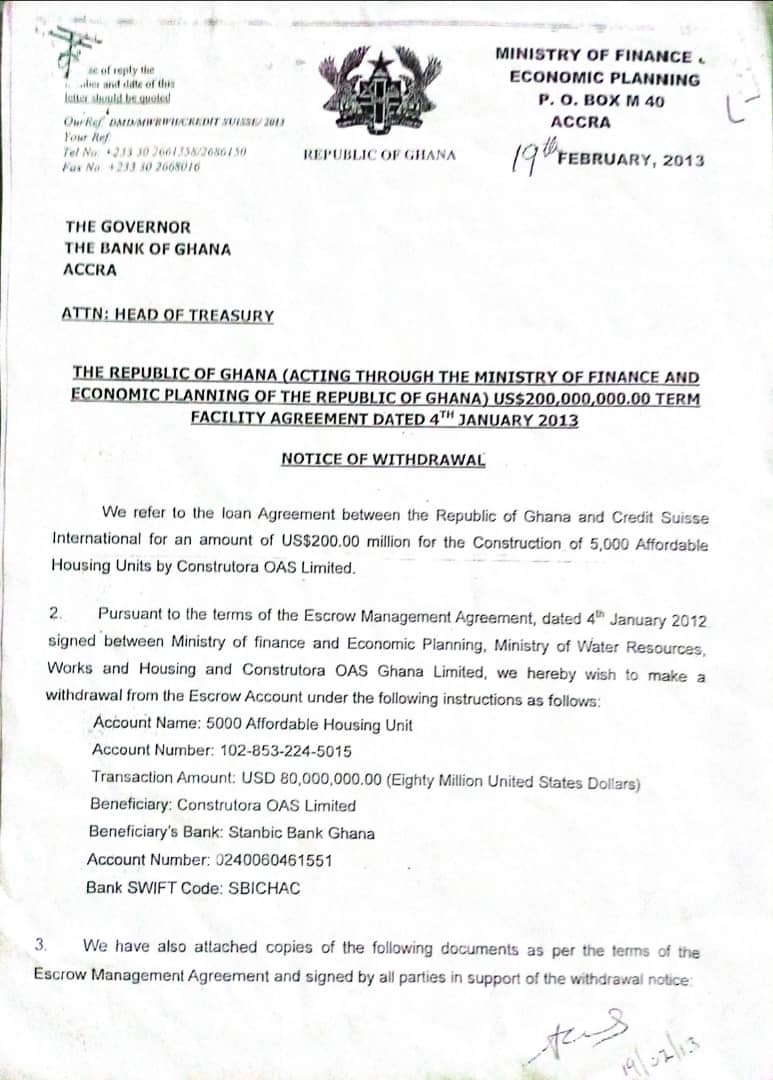 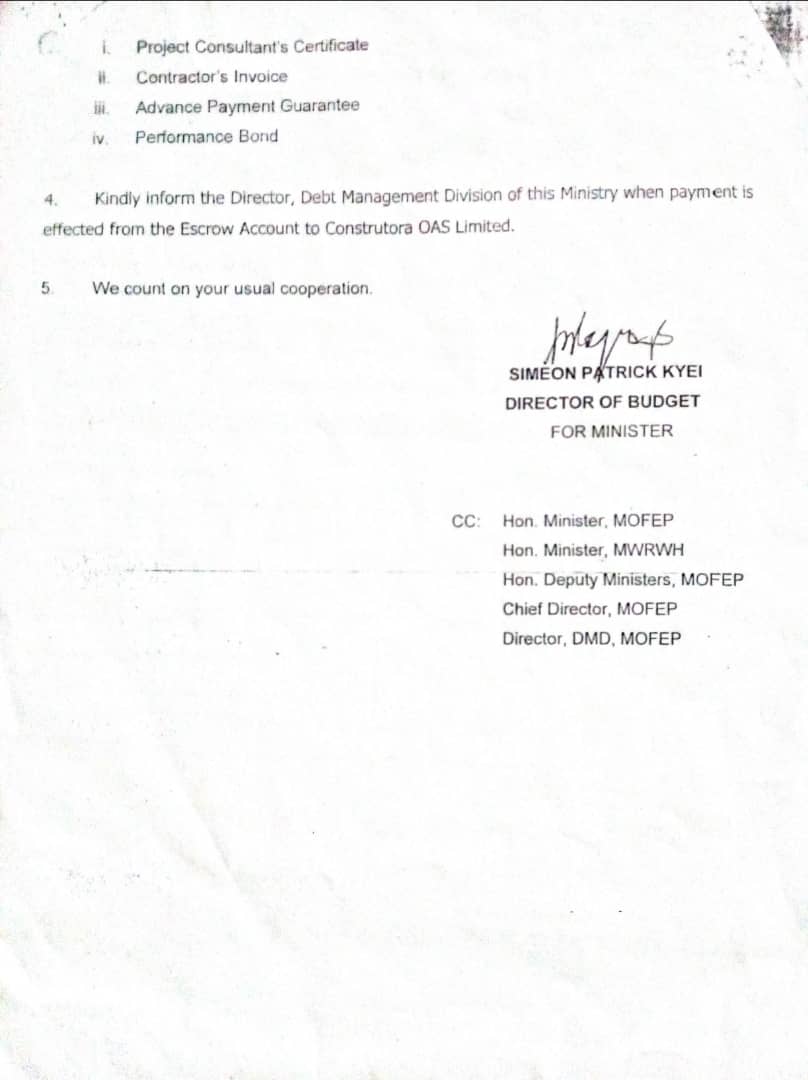 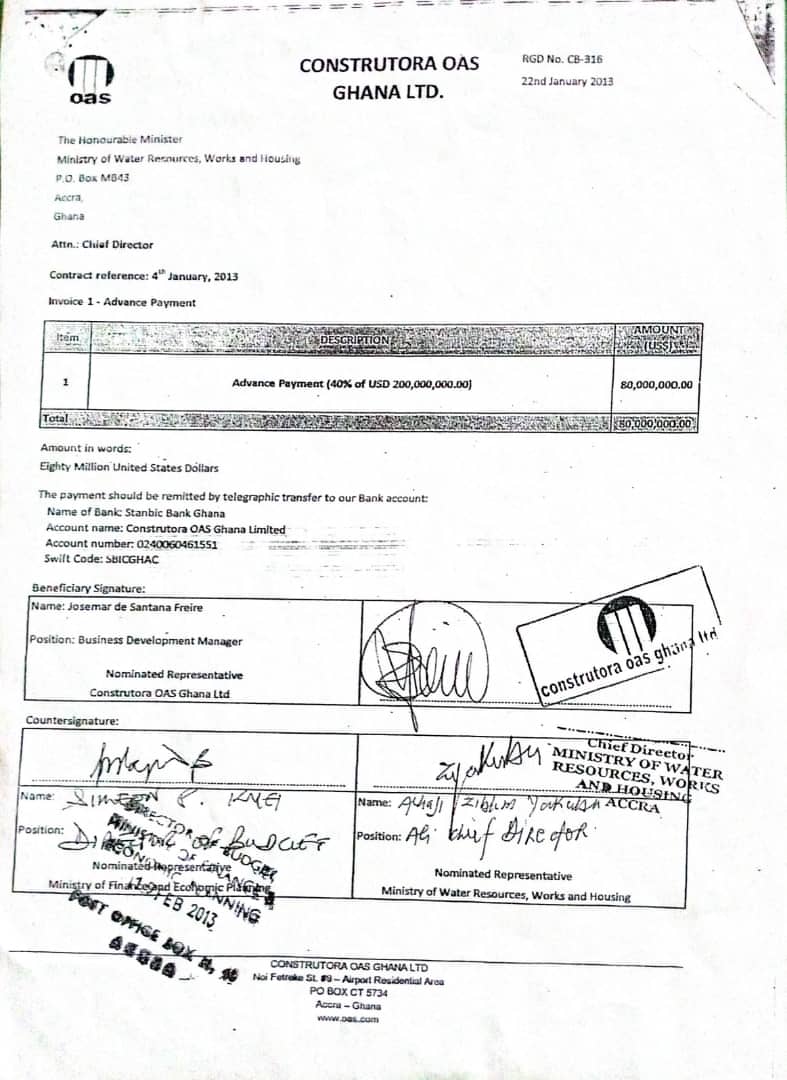 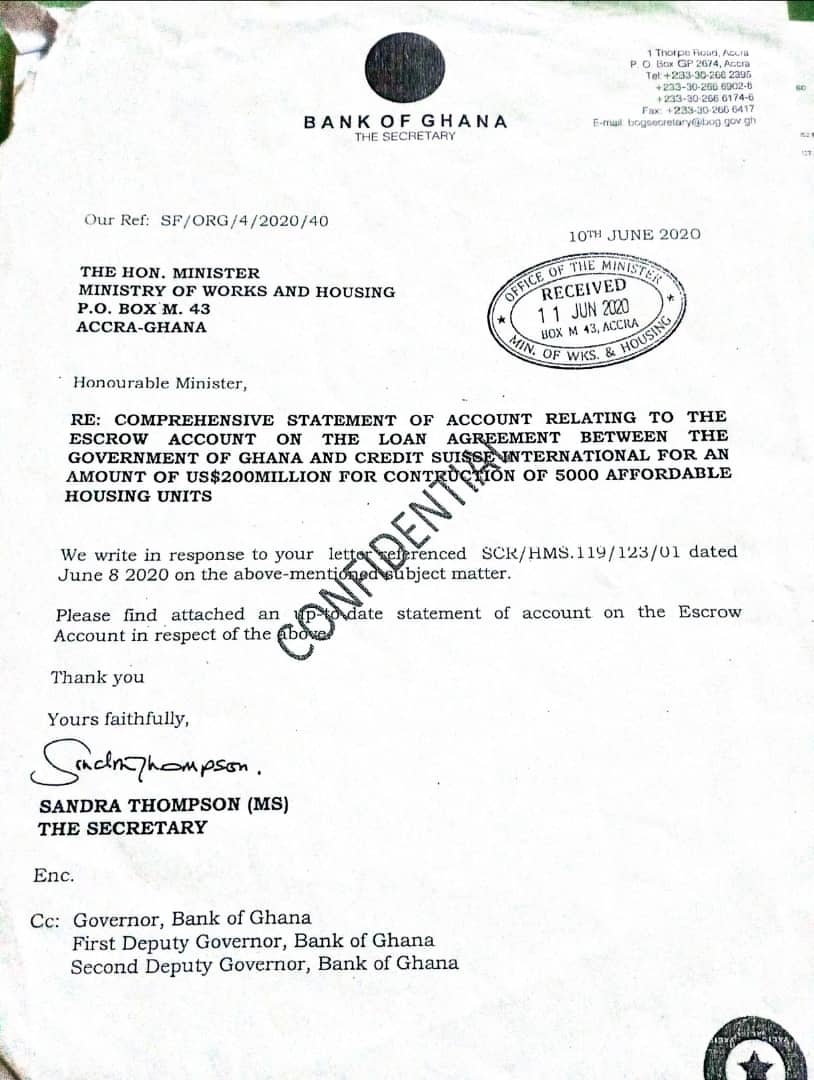 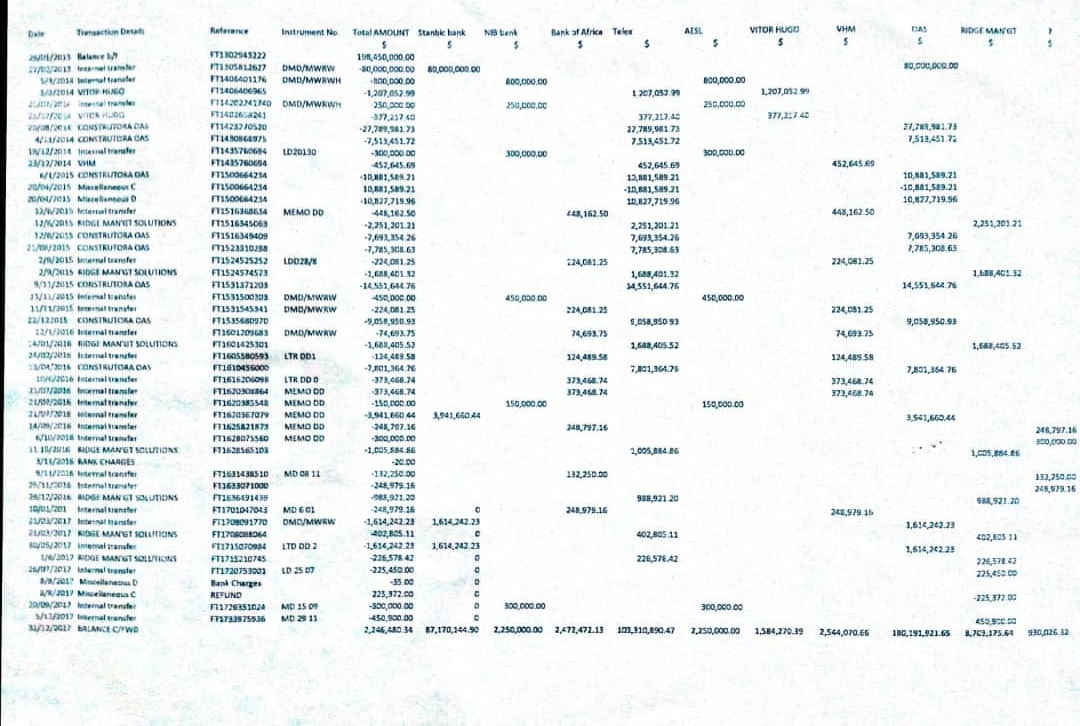 This outrageous act by the Ministry precipitated the bankruptcy of the Saglemi Housing Project.

Saddly, a howling US$1,550,000 was paid as transaction expenses, and that was not enough, while work had not yet started, a mouth-watering amount of US$80m was paid to the Contractor which gave him the opportunity to transfer that huge amount into an offshore account.

I sense something shady. The reason for Sampson Ahi’s defence cannot be justified unless he knows something different apart from the claims made on the TV show. For whatever reasons, paying off such a huge sum was a step in a very wrong direction. How reasonable can it be to make an initial payment of 40% of the total sum to a Contractor when work has not yet started?

I do not know what the Minister for Works and Housing may be doing regarding this prowling agenda by the previous government, but I expect the CID and all stakeholders concerned to, as a matter of urgency, act more rapidly than usual to bring anyone found to be culpable to book. When arrest stares one in the face, there is no justification whatsoever to delay. As the Honourable Member of Parliament for Bodi rightly said on the TV show, no arrest had been made then because there was no basis for such action to be taken and added that “there is nothing there.” I want to put it to him that there is something there now which calls for an immediate action to be taken. Arrest all involved and make Sampson Ahi tell Ghanaians and the world that, Atta Akyea is vindicated.