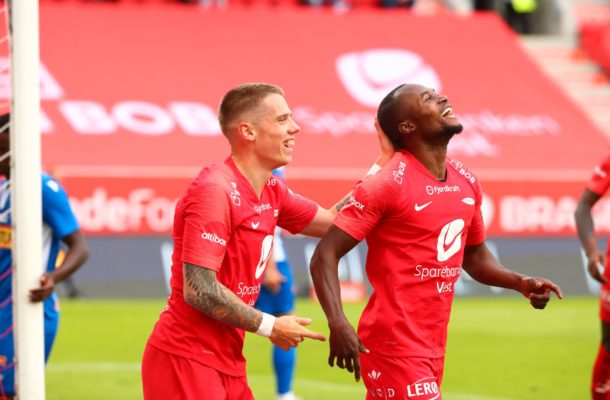 Ghanaian winger Gilbert Koomson was on target for his new Norwegian side Bodo/Glimt in their 3-0 triumph over Stabaek on Sunday afternoon in the Norwegian Eliteserien.

The winger who has struggled to get a look in for the first team reminded everyone the stuff he is made off as he netted for his side after coming on from the bench.

He scored his first goal for Bodo/Glimt after replacing Amahl Pellegrino in the 79th minute of the game with four minutes to end the game in an away game.

The away side were rampant as Erik Botheim gave Bodo/Glimt  the lead in the 54th minute before Fredrik Bjorkan added the second goal in the 62nd minute of the game.

Koomson added the third goal of the game in the 86th minute of the game after his introduction into the game from the bench.

They top the table with 44 points from 21 matches- three more points than second-placed Molde.