God won’t allow ‘all die be die’ in Ghana – Mahama 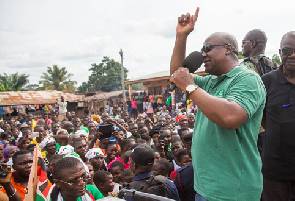 President John Dramani Mahama has said God will not allow any form of violence in Ghana before, during and after the upcoming December 7 general elections. This he said is because of God’s love for the nation.

Speaking to Ghanaians at Zabzugu-Tatale in the Northern Region as part of his campaign tour of the area, President Maham said “God will not allow such to happen; God will not allow all die be die to befall Ghana.”

“Despite tension in the country during election season, a number of times, after the elections, there is no violence because God loves Ghana. God will not allow such to happen; God will not allow all die be die to befall Ghana. Everyone will go and cast their ballots in peace and God will choose the right person for Ghana,” he said.

President Mahama who kick started his campaign tour last week is hopeful Ghanaians will retain him on December 7, to enable him continue what he calls ‘Changing Lives, Transforming Ghana’ agenda.

Flagbearer of the opposition New Patriotic Party (NPP), Nana Akufo-Addo, was widely rebuked for his infamous ‘all-die-be-die’ remarks in the heat of the 2012 election campaign.

Speaking to party faithful at a rally in Koforidua in 2011, Nana Addo accused the NDC of intimidating people during the Atiwa by-election and thus charged NPP supporters to match the NDC boot for boot in the 2012 election.

“You must understand that this party was formed by courageous people. Our leaders who formed this party that has now become the biggest political movement in Ghana were not cowards. So in 2012, we need to be courageous because all ‘die be die’. All die be die,” he said.

The NPP flagbearer’s comments were condemned by the NDC and some members of the public, who accused him of inciting his supporters to violence and threatening the security of the country.