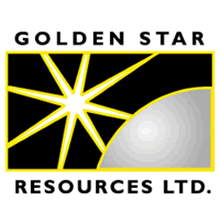 Golden Star announced the full settlement of  the loan taken in September 2014 which was used for the advancement of the Wassa Gold Mine including progressing a feasibility study for the Wassa Underground Gold Mine.  The company had previously repaid $3million.

The remaining $22 million of the loan, as well as all accrued interest thereon, has now been repaid in full using the proceeds from the financing transaction that closed on August 3, 2016.

The repayment of Ecobank II is expected to result in a saving of approximately $600,000 in interest charges during the remainder of 2016. It also is expected to have a significant positive impact on Golden Star's cash flows, as the Company was due to use its operating cash flows to pay $8.4 million to Ecobank by the end of 2017: $2.8 million in the second half of 2016 and $5.6 million in 2017.

"The repayment of the Ecobank loan is an important step in strengthening our balance sheet. By repaying the remainder of the loan now, we have reduced our interest charges in 2016 and strengthened materially our cash flow over the next 18 months. The funds allowed us to progress our Wassa Underground mine, and this asset forms an important part of our strategy to become a high grade, low cost, non-refractory gold producer. I look forward to updating the market on Golden Star's transformation further over the coming months." Sam Coetzer, President and Chief Executive Officer of Golden Star said.

The first stope was blasted at Wassa Underground on July 10, 2016, representing the start of pre-commercial production at the mine.