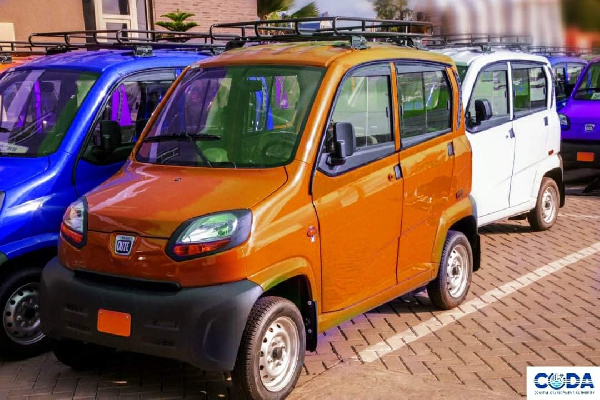 The NPP Government's promise to give operators of commercial motorcycles, popularly known as 'Okada' a better and safer alternative is set to be actualised with the acquisition of a number of mini vehicles in fulfilment of the promise to give Okada riders vehicles in exchange for their motorcycles on special terms.

The initiative was announced by Vice President Dr. Mahamudu Bawumia in the build up to the 2020 elections. While the opposition NDC promised to legalise the operations of Okada if elected to power, the NPP announced its plans to provide the Okada riders a better and safer alternative by providing them opportunities to own vehicles in a special, flexible barter agreement and terms.

Government has now taken a giant step towards fulfilling the promise by acquiring hundreds of mini vehicles to start with the first phase of the 'Okada for Car' initiative.

Okada riders interested in owning one of the vehicles will be registered and then hand over their motorbikes in exchange for the vehicle. Government will then register the vehicle in the driver’s name, while the driver pays in flexible instalment terms, the difference in value between the motorbike and the vehicle.

Government sources have revealed only okada motorbikes which are registered with the DVLA will be eligible to swap their motorbikes for the vehicle.

Also, the National Identification card, government sources have said, will play a key role in the entire process because persons without a national ID card won't be eligible.

The fulfilment of this promise, is a masterstroke for the governing NPP, considering how heated the Okada debate was during last year’s elections, with the NDC promising to legalise the commercial motorcycle business.

Interestingly, it was the NDC which banned the operations of Okada in 2011, and many, especially critics of Okada who see it as a nuisance on the streets and extremely dangerous, kicked against the NDC proposal.

The NPP's alternative, which promised a better and a saferr option for the young riders, was slammed by the NDC as a political talk and impossible to achieve.