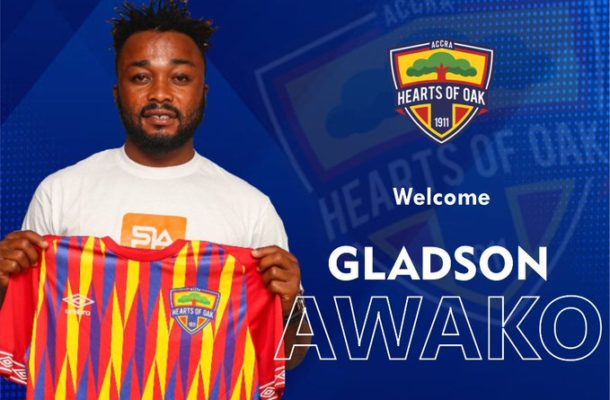 Great Olympics have emphatically revealed that there is no way they will return the monies paid by Accra Hearts of Oak for the transfer of midfielder Gladson Awako.

Reports were rife in the early hours of Saturday 18th September 2021, that the midfielder has decided not to train with the team anymore due to some personal problems.

Despite the player joining Accra Hearts of Oak less than a month ago from Great Olympics in a much publicized transfer saga.

That was 24 hours to the club's CAF Champions League preliminary stage game against Guinean side CI Kamsar which they won 2-0 on Sunday.

The rumours were swiftly brushed aside as being one of media speculation and that the player was just injured and will train with the team when he gets fit.

Hearts in a statement released on Tuesday evening says the player has difficulties which they expect him to resolve and join the squad for training very soon.

On Wednesday Great Olympics, on their Twitter handle issued a cryptic message stating that goods sold are not returnable indicating that they will not return any transfer money for Awako.


There were reports that the player was hell bent on a return to his former club and was in talks with them to return his transfer fee to Hearts.