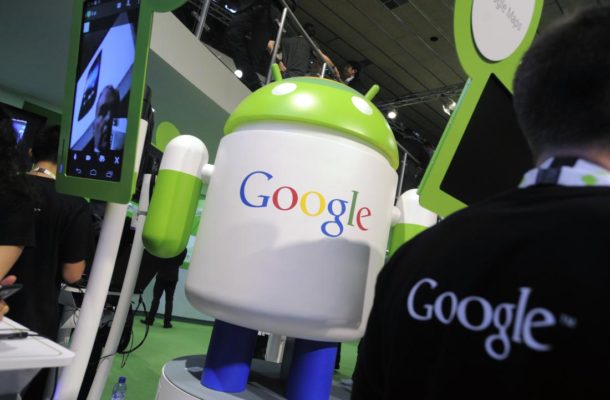 An Android operating software icon sits on display with a Google Inc. logo at the Google booth at the Mobile World Congress in Barcelona, Spain, on Wednesday, Feb. 29, 2012. The Mobile World Congress, operated by the GSMA, expects 60,000 visitors and 1400 companies to attend the four-day technology industry event which runs Feb. 27 through March 1. Photographer: Denis Doyle/Bloomberg via Getty Images

Real multitasking has finally come to stock Android — and it's about time.
Thanks in part to Samsung’s Galaxy Note lineup and Apple’s iPhone 6s Plus, large-screened phones are becoming more popular than ever. Time spent on these large phones, sometimes called “phablets,” grew by 334% year-over-year in 2015, according to data from Flurry Analytics.

Still, few phone makers other than Samsung have made good use of these larger devices. Google is hoping to change this with its newest version of Android. Called 7.0 Nougat, it notably features the ability to view apps in a split-screen mode. The software update, which Google began pushing out to certain Nexus devices this week, makes it possible for Android users to interact with more than one app simultaneously.

That’s beneficial because it reduces the need to skip around from app to app. Let’s say you’re making edits to a work-related document in Google Drive while chatting about the changes with your boss. With split-screen, you can have your document and email open and displayed on screen at the same time, making it easier to multitask. As Google pushes for Android to work on screens of all sizes, it’s promising to see the company refine how Android works on larger devices.

Still, some Android fans may find the functionality familiar. Certain Samsung phones have been offering split-screen modes since as far back as 2011. Users of LG’s G2, which launched in 2013, could open apps in floating windows on the home screen. But a split-screen view has never been part of Google’s core Android software — meaning you wouldn’t be able to enjoy the feature unless you purchased a phone whose manufacturer added the capability. Google’s latest version of Android should change this, making split-screen more widespread.

How does split-screen view in Android 7.0 Nougat work? Pretty much the same way it does on Samsung's Note phones. On the Nexus 6P, I was able to launch two apps by tapping the recent apps button, pressing and holding down on the title bar of the app I wanted to view in split-screen mode, and dragging that app to the top or bottom of the screen. Like Samsung’s multi-window mode, Google’s version also allows you to adjust the amount of space one app occupies on screen over the other.

Nougat’s split-screen mode is emblematic of the software’s larger overall focus on multitasking. Even cycling between apps has become slightly easier: tapping twice on the recent apps button will switch between the two apps you last opened. These improvements are especially critical as Google introduces devices like the Pixel C, which is a tablet meant to be used with an accompanying keyboard — similar to Microsoft’s Surface lineup and Apple’s iPad Pro. Until this point, however, Pixel C owners didn’t have an easy way to juggle multiple apps at once, a sore point with critics.Above all else, the decision to add a split-screen view to Android suggests that Google — not just its hardware partners — considers productivity to be an important part of the Android experience moving forward.