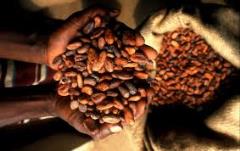 Government has increased the produce price of cocoa by 11.4%

The Deputy Minister of Finance, Ato Casseil Forson made the announcement at the celebration of the International Cocoa Day at Tepa, in the Ahafo Ano North District of the Ashanti region, under the theme, “Transforming the cocoa sector for economic growth- The role of the youth.”

The Minister, who doubles as the Chairman of Producer Price Review Committee, said the new price takes effect from October 1, 2016.

The Deputy Minister assured the farmers that, “government shall continue the Stabilization Fund with annual contributions from the FoB price as a risk mitigation mechanism against declines in international cocoa prices.”

He said government will “continue with the fund so as to be able to cushion farmers, should the world market price begin to decline as we move into the future.”

Meanwhile, some farmers of Cocoa in the Ashanti Region, present at the celebration, have expressed disappointment in government over the increase, saying it did not meet  their expectation.

According to them, their expenses still outweigh their gains.