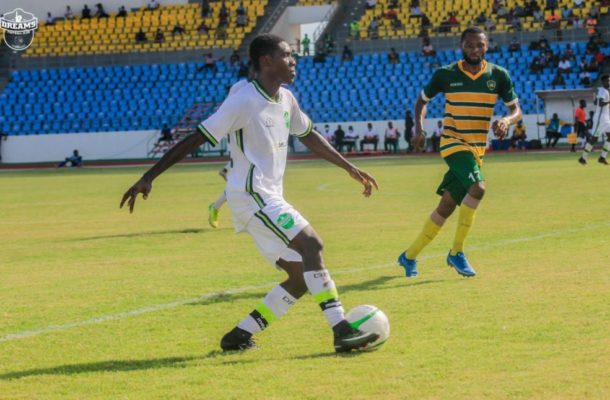 Ebusua Dwarfs could not take advantage of home comfort as they drew 1-1 with Dreams FC at the Cape Coast Stadium in the Ghana Premier League match day 25 clash.

Dwarfs are win-less in their last four matches dragging them into the relegation dog fight as the games keep coming thick and fast.

They had to come from behind to secure the 1-1 draw as they now lie just two points above the relegation zone.

It was the away side Dreams FC who drew first blood as Agyenim Boateng Mensah headed home a cross from Issah Ibrahim from the right flank.

Dreams FC who were dominating play should have added to the scoreline on several occasions but poor finishing and some defensive masterclass from Dwarfs thwarted them from adding to the goal before the break.

The home side pulled parity in the 65th minute through Moro Sumaila for his fifth goal of the season after an assist from midfielder Michael Ohene Asamoah.

Sylvester Simba should have won the match for Dreams FC but missed a glorious opportunity while Dwarfs also had the chance to have won but also squandered it.