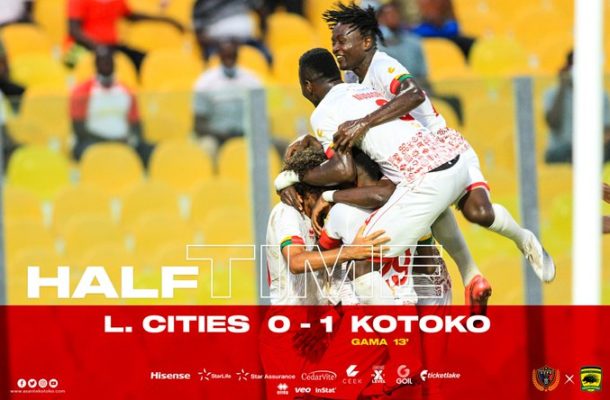 Kumasi Asante Kotoko have pushed relegation threatened Legon Cities back into the relegation places after a solitary Fabio Gama goal.

Kotoko needed a reaction after their home defeat to Medeama at the Obuasi Len Clay Stadium last Sunday.

The Brazilian midfielder once again showed his importance to the Asante Kotoko set up as he scored from a fabulous free kick in the 13th minute.

Gama curled home a free kick from the right side of the pitch into the left bottom corner although the goalie was fooled by the movement of Augustine Okrah as it nestled into the net.

Kotoko should have finished the game in the first half but Emmanuel Gyamfi, Augustine Okrah all wasted presentable opportunities.

Legon Cities also went very close as Hans Kwofie threatened the Kotoko goal but for Razak Abalora while Baba Mahama should have done better when played through on goal.

The porcupine warriors went into the break with a deserved solitary goal but it could have been better.

Legon Cities started the better of the two teams in the second half but could not convert their chances.

With 15 minutes to end proceedings Ghana's all time top scorer Asamoh Gyan was introduced in the game but could not rescue his side as the defeat pushed Legon Cities into 16th while Kotoko climb top of the league at least for now.