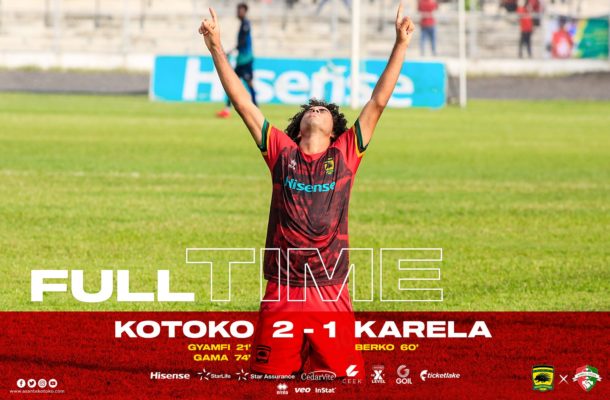 The porcupine warriors secured a hard fought 2-1 victory over Karela United in a match that was fraught with a lot of controversies.

Kotoko started the match in dominant fashion and it paid off despite resistance from the away side who stood very resolute.

The porcupine warriors opened the scores in the 21st minute after some fine work from Fabio Gama to captain Emmanuel Gyamfi to finish off to give Kotoko 1-0.

Fabio Gama produced one of his trademark through passes as he found Gyamfi on the edge of the Karela box. The winger ran into the penalty box with his composure intact despite being chased by three opponents and finished it off with a cool low strike beyond goalkeeper Baidoo.

Kotoko finished the first half with a 1-0 lead after a dominant first half display.

There was confusion between the referees in the 58th minute after Ghana Premier League topscorer Diawise Taylor scored his 17th goal of the season.

Assistant referee hoisted high his flag for offside but after consultations with the center referee the centre referee over ruled the decision and awarded the goal to make it 1-1.

This decision infuriated some Kotoko officials who stepped onto the pitch and engaged the referee as the match had to be halted for some minutes.

The game finally restarted after some cool heads prevailed  as ten minutes later in the 68th minute Kotoko were awarded a contentious penalty after Evans Adomako appeared to have been brought down by goalkeeper Baidoo after he rushed out of his penalty box to claim a back pass.

Fabio Gama stepped up and converted the penalty expertly for his fourth goal of the season to give the porcupine warriors a 2-1 win which sent Kotoko top of the league summit temporarily till Hearts plays on Thursday against Legon Cities.