GPL: Great Olympics come from 3 goals down to draw against Dreams FC 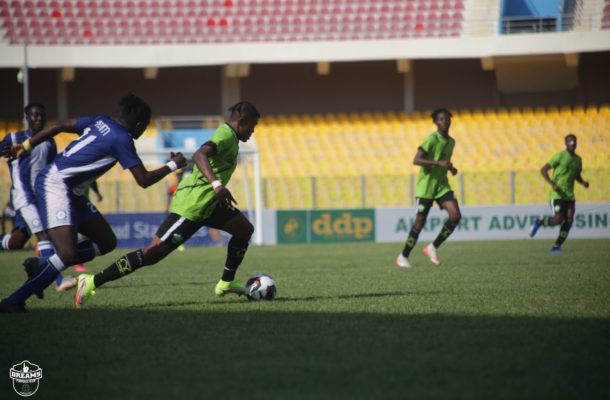 It rained goals at the Accra Sports Stadium on Sunday afternoon in the match day four Ghana Premier League clash between Great Olympics and Dreams FC.

Dreams FC will rue their porous defense as they took an unassailable 3-0 lead and went into the break with the comfortable lead but squandered their advantage and left Accra with a point instead of all three.

Maxwell Abbey Quaye and Abdul Fatawu Issahaku both scored a brace when Great Olympics and Dreams FC met on Sunday. Issahaku – a Ghanaian International registered a brace within 13 minutes of the first half after Philemon Baffuor had given Dreams FC a precious lead inside 5 minutes.

Fatawu Issahaku then added the second goal in the 15th minute after connecting a brilliant ball from midfield. The former Steadfast FC man grabbed his second –Dreams FC’s 3rd in the 27th minute to make things difficult for Great Olympics. But the Dade boys didn’t give up as Maxwell Abbey scored from the spot in the 34th minute to reduce the deficit. Back from recess, the League’s top scorer scored yet another penalty in the 62nd minute to tilt things slightly in favour of Great Olympics.

The Blues continued to pile pressure in search of the needed equalizer and their hard work paid off in the 84th minute as Dreams FC could not contain the pressure. Samuel Armah got the equalizer for the Dade Boys as the game ended 3-3 at the Accra Sports stadium.