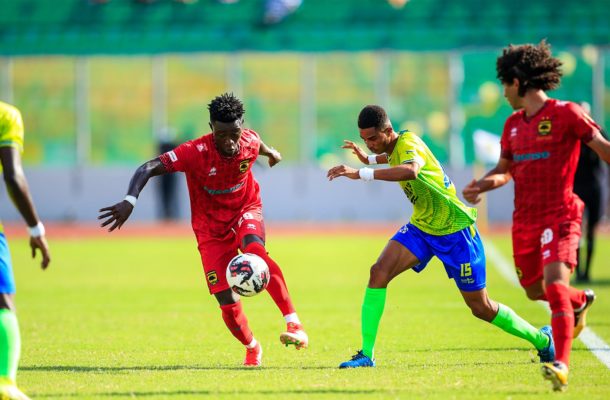 Kumasi Asante Kotoko are quietly becoming the kings of last minute goals as they repeated the dose they gave Dreams FC in match day one against Bechem United at the Baba Yara Sports Stadium with two late strikes.

The porcupine warriors returned to their stomping grounds after a long hiatus due to renovation works that was ongoing at the facility for the entirety of last season and midway through the truncated 2019/2020 season.

Kotoko started the game on a bright note but struggled to create clear cut chances in a match was fairly balanced with very few goal mouth action.

But Bechem United should have opened the scores as early as the 6th minute as striker Emmanuel Avornyo was presented with a golden opportunity but he could not utilize it as Razak Abalora took all the plaudits with a fine save.

Patrick Asmah was taken off in the 36th minute with an injury concern with Ibrahim Imoro his replacement.

But after recess Clinton Duodo was a torn in the flesh of the Kotoko backline but his end product was poor as he failed to punish the home side.

The reds found the opener via the penalty spot after nimble footed Isaac Oppong was hauled down in the box by Bechem United's Dennis Mosaka.

Up stepped captain Ismael Abdul Ganiyu who converted to give Kotoko a 1-0 lead before new boy Samuel Boateng wrapped up the game with a fine header from a cross from Imoro Ibrahim to give Kotoko a 2-0 win.

It was a harsh scoreline on Bechem United who at least deserved something for their efforts but they were taught a lesson by the impressive unforgiving reds.